Deadline have reported this... transcendent news:

EXCLUSIVE: Barry Sonnenfeld, finishing up his third Men in Black film, has come up with a new spin on the alien film genre. Sonnenfeld is at the center of a publishing/movie deal with Liquid Comics and producer Arnold Rifkin and his Cheyenne Enterprises. Sonnenfeld will team with comic book writer Grant Morrison to develop a graphic novel and movie under the title: Dominion: Dinosaurs Versus Aliens. Morrison, whose comic book work includes Batman and The Invisibles, will write both the graphic novel and the script. Sonnenfeld will direct the film.

While Sonnenfeld has scored his biggest commercial successes with aliens, he's also a dinosaur fanatic who sparked to the idea of combining them. "Growing up, my fascination was all things dinosaur, and as an adult, I've had some success making films about aliens, so this is a dream come true," said Sonnenfeld, who first met Liquid Comics founder Sharad Devarajan when he wrote a forward for one of Liquid's graphic novels. "We've been trying to do a project ever since."

The graphic novel will chronicle a secret prehistoric world war battle. When an alien invasion attacks Earth in the age of the dinosaurs, the planet's only hope is the giants that roam the planet with, it turns out, a lot more intelligence than previously realized.  Sonnenfeld, Rifkin and Devarajan will produce, while Liquid cofounder Gotham Chopra will be executive producer. WME will package the film.

The graphic novel will be published later this year in print and digital formats. Artwork will be done by Liquid's Mukesh Singh, who teamed with Morrison on 18 Days. Morrison's repped by ICM.

Normally this is where I'd call up 8-year-old-Ally, but frankly, 27-year-old-Ally is just as demented at this news.  Grant Morrison and Barry Sonnenfeld.  Working on a film that involves a war between aliens and dinosaurs.

Hollywood, listen to me very carefully. Whatever it is Grant Morrison and Barry Sonnenfeld need to make this film - money, wine, women, men, drugs, Fabergé eggs, their own sovereign country - let them have it.  Give it to them.  Make this happen. 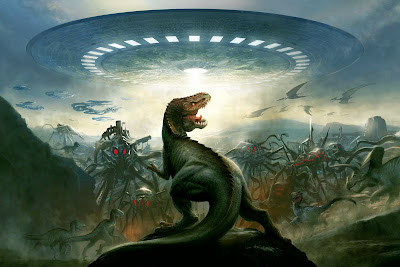