On Tributes to Howard 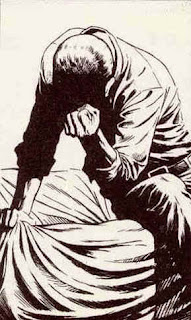 I wasn't actually aware that Roy Thomas had written a comic tribute to Howard (inked by Sandy Plunkett) that depicts his suicide.  Frankly, I wish I didn't.

Thomas' comic, "Death of a Legend" ( portrays what was generally considered the facts of Howard's last moments: REH leaves his father to the paperwork, the nurse tells him Hester isn't expected to regain consciousness, and he goes out into the driveway.  REH, with tears in his eyes, is accompanied by a series of tableaus depicting his stories: a scimitar-swinging warrior, a rapier-wielding swashbuckler, a hide-clad barbarian, an axe-bearing king... and in a two-page spread, we see the images of his heroes and villains surrounding him, as the bullet goes through his skull - in fairly graphic detail. Then the funeral notice, and the famous "All Fled" couplet.

I'm really not sure how to feel about it.  Howard's suicide - anyone's suicide - is a sensitive topic.  Howard's is especially sensitive because it's so widely misunderstood, from those thinking it was a result of him being an emotionally retarded man-child incapable of living without his mother looking after him, to those thinking he drove into "the desert," to yet others who seem to think he used a shotgun.  Thus, when Howard's suicide comes up, it's almost always a very tense affair with much sucking air into teeth and wincing.

At the same time, well, nothing is really sacred in art.  Art should be challenging, and confront matters that might be controversial, painful or difficult head on.  Some of the greatest works are based on tragic moments. Yet every time somebody tries to do a tribute to Howard that involves his death in some matter, I just find it somehow unpalateable. 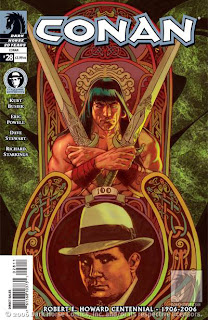 Take Kurt Busiek's tribute in Dark Horse's Conan #28, "Storyteller," concurrent with the Robert E. Howard centennial.  I really didn't care for it.  At all.  It recast REH as Rovann, a chubby, dorky young Aquilonian teller of tall tales, who is misunderstood by the people of the town, considered a "Mama's Boy" for having the gall to stay at home to look after his sick father.  All through the story, he comes across as a complete loser.  Nobody respects him, he's clumsy, he's thick, and even in his heroic death, nobody even knows about his final moment of bravery.  As tributes go, it came across as remarkably backhanded: far from the slim, energetic teenager the real REH was, Rovann was more like the popular depiction of Howard as a "terribly unhappy, mother-obsessed, fattish bodybuilder" than the real REH.  Even though I can recognize this was Busiek's last regular issue, the inclusion of Black Kalanthes and Janissa felt incredibly self-indulgent.

Yet it was clear this was Busiek doing his best.  He really felt that this story was a fitting, heartfelt tribute to the man.  It's full of references to other Howard tales, bits and pieces of his life, and Busiek has always maintained deference to REH, even when he takes liberties that (in my opinion) make no sense.  It wasn't intended to be character assassination or parody, it was truly meant to be a tip of the glass to the man who started it all.

The Whole Wide World didn't depict Howard's suicide directly - and I consider that a very wise decision. The film already invents a few colourful embellishments (like Howard rushing into the long grass, whacking his sabre, tears streaming down his face), but it's remarkably tactful and sensitive in its treatment of the suicide.  Indeed, introducing it to the audience via Novalyne's reaction is arguably the best was I could think of.  It's relevant to the story, since it was naturally the way Novalyne discovered it - but it managed to be a bitterly sad moment, conveying the emotional power of the incident with subtlety.

I don't know whether I'm alone or not in my assessment of "Storyteller," nor of "Death of a Legend," but both leave the sourest of tastes in my mouth - yet should they?  By disliking them, somehow I feel like I'm being churlish, finding fault even in something as laudable as a tribute.  That I'm personally attacking Busiek and Thomas for not showing their respect and appreciation "correctly," or some such.  Then I wonder, what is the "correct" way to tribute Howard?  I haven't the foggiest - but I can say that depicting him as a dumpy little nerd, or illustrating his violent death, doesn't exactly seem the best way to go about it.

Perhaps I'm being over-sensitive.  But then, in a world where we've had to put up with Dark Valley Destiny, "Gilgamesh in the Outhouse," "Conan Unchained," that article by that Huffington Post alumnus, Norman E. Bates, and all manner of ridiculous balderdash, perhaps I'm just a bit instinctual hostile, even to works claiming to be tributes.  I suppose I'll just have to appreciate the sentiment, as opposed to the expression of that sentiment.
Uttered by Taranaich at 20:46