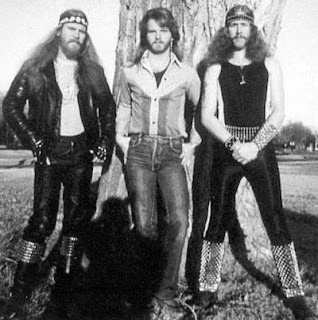 I still need to finish that retrospective on Manilla Road's sonic tributes to Robert E. Howard, but then I found this recent interview, and I'm so thrilled I can barely type.

WC: It's like there's something in the collective mind of people that brings them all to a certain topic at the same time.

MS: That brings to mind that I saw an ad for a new Conan movie that's gonna come out in 2009. I have no idea who's in it but just the thought of another Conan movie is like "Well, I hope they do it right this time".

Watkiss has a rival for my man-crush affections: Mark "the Shark" Shelton, you are my Metal Hero.

MS: I do,too! My favorite movie of all time is "Jason and the Argonauts". I'm stuck on it just like I'm stuck on my old Judas Priest albums like "Stained Class" and "Sin After Sin".

WC: This computer generated stuff of today just doesn't have the personality of what Harryhausen did.

MS: I agree. I still like the original "King Kong". (chuckles)

WC: We better get back on track or we'll spend all night talking about this stuff.

MS: Yeah, I have a feeling we could!

WC. I know you've had whole albums where the lyrics are inspired by Poe and Lovecraft. What are some of your favorite stories by those authors?

MS: My favorite Edgar Allan Poe story is "Mystification". It's one you don't often find in the "Best Of" collections. There's a collection out there right now...I can't remember the name of the publisher...that's called "The Complete Poe" and it's a good one to get because it's got everything he's ever wrote. "Mystification" is not one that shows up as much as "Masque of the Red Death"...which would be my next favorite Poe story, by the way...but there's a lot of Poe's own personality in that story. I think he envisioned himself as one of those characters. It's a really good story and I thought he made statements through his storyline that were really statements about himself. That's why we did a song "Mystification", because that story hit me so hard.

As far as Lovecraft goes, my two favorite stories are not the usual Lovecraftian stories. One is a short story called "The Tomb" that I love completely. It's written in almost an Edgar Allan Poe style and I think Lovecraft was after that and he did it just splendidly in that story. That was one of those stories where you could really see where H.P.'s roots in the horror genre were. He proved it in that story. The other one,strangely enough, is his more Mary Shelley strain of work: "Herbert West, Reanimator". (laughs)

WC: If I remember right, Lovecraft didn't think too much of that story himself.

MS: He hated it. I don't think too many people knew about it until the movie started coming out. Jeffrey Combs I thought was really good in the Lovecraft movies. "From Beyond", he was great in that. You know, I actually acquired the original Necromomicon Press versions of "Reanimator". They were just little short stories that originally appeared in "Weird Tales". I've got a little booklet that was put out by Necronomicon Press that was all the little short stories put together. I just thought the whole thing was great!

WC: "The Color Out Of Space" was my favorite Lovecraft story.

MS: All of his work's really incredible. His real ethereal stories are so far out there that nobody could ever write like that, I think.

WC: The one guy who equalled if not surpassed him when it came to weird visions was Clark Ashton Smith.

MS: Clark Ashton Smith's pretty good. My favorite of all time, just because of the way he mixes reality with the supernatural, is Robert E. Howard.

WC: Yeah, he dabbled in just about every genre you could think of.

MS: Just about everything. Sports stories, Westerns...he was all over the board. His unedited works that are coming out now are just incredible. The Conan stuff is great, the King Kull stuff is pretty good stuff. Not as good as Conan, I believe. I love the Bran Mak Morn stuff, Solomon Kane...