I'm sure I'm not alone in observing the second anniversary of Steve Tompkins' passing.  I'm also sure I'm not the only one who thinks they could possibly say anything that isn't redundant.

However, there's always something new to discover. Damon Sasser recalls his erudition and breadth of knowledge, citing some of his best essays, including one I didn't know was available on the internet until know: Black Stranger, White Wolflord. This essay, originally published in Two-Gun Raconteur #12 and third place for the REH Foundation Hyrkanian last year, fits right in with other pieces Steve wrote regarding "The Black Stranger": Grinning, Unappeased, Aboriginal Demons and This, That, T'Other being online, and his introduction to The Black Stranger And Other American Tales.  I'd already read it in print form, but I'm glad to find more Tompkins material on the internet.  And that's for just one of Howard's stories!

If you haven't already done so, go and read over Steve's many marvellous writings, be they on The Cimmerian website, his fanzines, or in print, in addition to some of the fine tributes also printed in Two-Gun Raconteur.

As for me?  Well, I still can't find the words.  So, I offer this small tribute in visual form.  I always felt I should draw a tribute to Steve in some manner, and this just seems appropriate.

Skål, sláinte, prost, and many, many cheers for Steve Tompkins. 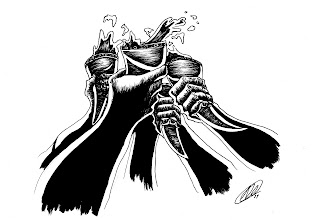