Elves in the Hyborian Age 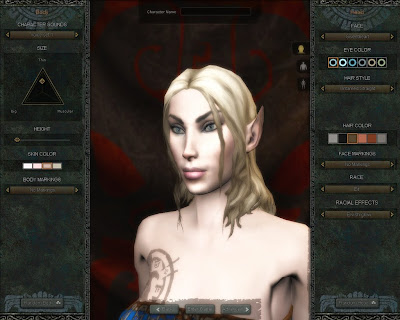 Inspired by this... astonishing thread.


I was wondering today, wouldn't it be great if there were elves in Age of Conan? I mean.. elves & boobs is a good combo!

Wow and all the other big MMOs like WAR and Darkfall have them so its obvious if you want conan to be the best you gotta have elves. It would make perfect sense in the lore cause we can just have them in next expansion, have them been in very deep slumber for a long time, and only just awakened in the forest of Cimmeria. Elves Vs Cimmerians! I mean isnt Vanir boring?

I mean we cud make them like really darker by giving them blood, and ofc having them show boobs more for the adults! But also they dont have to have pointy ears, why not just make them like bear shamans on acid?

So yeah I think elves should be in AoC! Cud even make a storyline with conan in killing the elves i mean how awesome would it be to see conan chopping elven heads screaming "For Aqulona! Elves must die!" and u fight beside him and stuff.

And then this one:


Don't ignore this thread before you read the first post. It has nothing to do with WoW.

So, some guy started this thread, which eventually, rightfully, got locked.

But it got me to thinking.

Howard never really got to complete the Hyborian world. We don't REALLY know what's out there.

So I dug up the old Howard books and short stories (reckon I got most of them) and with tidbits like Tower of the Elephant, it got me to think "Elves" may really be out there.

Yag-Kosha isn't a native of the Hyboria we know, that's for sure. Where did he/she/it come from? Many scholars thought that its a sort of fantasy/sci-fi crossover, but really there's no classic elements of sci-fi in the story.

Matter of fact, Conan himself is a cimmerian and the cimmerians are supposed to be descended from the survivors of Atlantis, which were an extremely advanced society. Not too far fetched to think they had contact with - what?

So pointy-eared Tolkien Elves - no.

I reckon these could fit in very well with the Howard idea of Hyboria.

You wanna know something really scary? The idea of elves running about in Cimmeria, Aquilonia or Stygia may not be as impossible as one might think.

According to Howard, elves are a part of the Hyborian Age. Not only elves, but dwarves, gnomes, sprites, faeries, goblins, hobgoblins and ogres.


Her hair was like elfin-gold; the sun struck it so dazzlingly that he could scarcely bear to look upon it.
--"The Frost-Giant's Daughter."

But his looks and expressions failed far of bearing out his words. His rubicund countenance fairly glowed, and his eyes sparkled, so that his white beard seemed incongruous. Indeed, he looked remarkably elfin, reflected Kull, who felt vaguely resentful.

Ka-nu looked more like a mischievous elf than ever.
- "The Shadow Kingdom"

"Ho, Kull!" a cheery voice boomed from the door and a bearded, elfish figure strode in, accompanied by a slim, frightened girlish shape.
- "The Cat and the Skull"

... Volmana, the dwarfish count of Karaban...

"Volmana!" gasped Conan breathlessly. "I’ll know that dwarf in Hell –"
- "The Phoenix on the Sword"

The last was a dwarf with a cruel aristocratic face, whose abnormally broad shoulders and long arms contrasted strangely with his stunted figure.
- "The Phoenix on the Sword" (draft)

Stony, immobile, dwarfish, yet unmistakable, the features of the Zingaran boy stared unseeingly at him.
- "The Pool of the Black One

Conan did not press the matter, nor did he look incredulous. His beliefs included night fiends, ghosts, hobgoblins and dwarfs.
- The Tombalku Fragment

A monstrous dwarf dragged her before Totrasmek who made her dance naked between four cobras conjured out of smoke.
- "The Man-Eaters of Zamboula" Synopsis

Thak, stooping like a giant gnome, approached the wall where the rope hung, and gave it a peculiar sidewise pull.
- "Rogues in the House"

The familiars went away, with their bent backs like silent gnomes, and Xaltotun stood alone beside the stone altar, his dark beard blown in the wind, overlooking the valley.
- The Hour of the Dragon

"He said I was but an earthly sprite, knowing naught of the deeper gulfs of cosmic sorcery."
- "A Witch Shall Be Born"

Between the trunks of the trees they caught glimpses of faery-like vistas.
- "The Frost-Giant's Daughter"

"... A candle, quick! Look again at the spot where the king said the goblin died!”
- "The Phoenix on the Sword"

Conan listened attentively. The natural skepticism of the sophisticated man was not his. His mythology contained ghouls, goblins, and necromancers.
- "Iron Shadows in the Moon"

Half mythical and altogether horrible, these apes were the goblins of Hyborian legendry, and were in reality ogres of the natural world, cannibals and murderers of the nighted forests.
- The Hour of the Dragon

You, who believe in ghosts, ghouls, goblins, and all manner of uncanny things, do not seem to fear any of the things in which you believe."
- "Beyond the Black River"

All the tales he had heard in the Zuagir tents of devils and goblins came back to bead his flesh with clammy sweat.
- "The Man-Eaters of Zamboula"

So in silence they glided on with the green fire-stones blinking overhead and the flaming floors smoldering under their feet, and it seemed to Valeria as if they fled through hell, guided by a dark-faced, lank-haired goblin.
- "Red Nails"

It was as large as a pig, and its eight thick hairy legs drove its ogreish body over the floor at headlong pace...
- "The Tower of the Elephant"

Was this in truth that blood-thirsty ogre of the southern seas who had so mysteriously vanished years ago, but who still lived in gory legends?

They brought him to the deck of the Venturer – a tall, dark, rangily built man, ashy with fear of his captors, who were ogres of that coast.
- The Hour of the Dragon

It was a survival of an older, grimmer age, the ogre of many an ancient legend - a saber-tooth tiger.
- "Beyond the Black River"

OK, before anyone goes berserk:

This post is not an attempt to justify the addition of Dungeons & Dragons-style elves, dwarves, gnomes, sprites, faeries, goblins, hobgoblins or ogres into Age of Conan or the Hyborian Age. Such an idea is so stupefyingly moronic as to be preemptively banned by the Geneva Convention.
The punishment is death by cannon.*

Now, what exactly Howard could've meant by "elfin-gold" is better left for a Cimmerian post, but suffice to say, there are many mythological elves Howard could've drawn inspiration from, though most obviously one of the original beings of Norse Mythology would be a logical choice. There's no guarantee that the Elves are even "real" within the Hyborian Age, either; rather, they could be the distorted memories of powerful pre-Cataclysmic beings like the Elder Race and the Old Race of Men.

However, for fun, let's go with the idea of elves existing in the Hyborian Age. A lot of mischief could be made here, since most people have a particular idea of what Elves are: snooty, petulant, nature-worshiping, sometimes magical, lithe and bony-armed, androgynous bishounen who prefer archery, stealth and acrobatics. This horrible version even infected Jackson's The Lord of the Rings films. When those "Galadhrim" marched up to the Hornburg in The Two Towers, I doubted any of them could even lift their prop swords, let alone a real one.

If Funcom introduce elves into Age of Conan (and again, not saying they should), this would be a delightful opportunity to really shock unsuspecting players. The original elves of Norse Mythology were terrifying beings: unearthly beautiful, capable of passing through different planes of existence and even physical objects, possessing good Viking beards, and being generally far more manly than the sad shells they are in Everquest. However, the other "little people" Howard dealt with in his modern yarns like the Worms of the Earth and the Little People would function excellently too.

Then there's the goblins. I can imagine the scenario now:

A couple gamers new to Conan embark on a new quest in a secluded Aquilonian village. The locals are being terrorized by night raids against unknown antagonists, waking up to find families slaughtered in their homes, cattle torn to pieces, blood everywhere. They fear this to be the work of... goblins.

The players scoff. Oh, goblins, right, this should be a fairly easy quest, they think, picturing some pathetic little creatures that escaped from a Brian Froud picture-book, or refugees from Warhammer Fantasy. They don't make any particular preparations: the locals tell them the rough location of the Goblins' lair, but don't believe the heroes could come back alive. They creep through the oddly quiet forest, and come to the lair, a mess of wood and leaves. They enter the instance, eager for a chance to grind, raise some XP, farm a little coin to buy some nice kit.

In the first few seconds, they're ripped to shreds by the pack of 800lb man-eating killer apes.

"You're not in Azeroth any more!"

*That is, being shot by a cannon. The lesser crime of being shot out of a cannon is reserved for simpler mistakes, like use of the term "Hyboria," the 10,000 BC fallacy, the Cormac Fitzgeoffrey 6'2" 210lb fallacy, and other infractions.
Uttered by Taranaich at 01:46