Whither Goest, Conan of Sumeria? 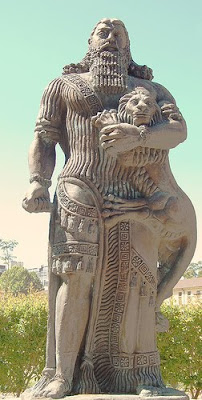 The recent nonsense about Conan the Sumerian got me wondering: have any professionals ever made this classic rookie mistake? Well, only one way to find out: Avast mateys, rig out and hoist away, we of this proud ship HMS Google brave uncharted waters!

Robert E. Howard's pulp novel warrior comes to life in a pair of sword and sorcery epics. In "Conan the Barbarian" (1982), the titular Sumerian hero (Arnold Schwarzenegger) sets out to avenge the murder of his parents at the hands of evil cult leader Thulsa Doom (James Earl Jones). With Max von Sydow, Sandahl Bergman, Mako. Then, "Conan the Destroyer" (1984) finds the Hyborian Age swordsman battling all manner of beasts and brawlers while on a quest for a mystical gem. Grace Jones, Wilt Chamberlain, Olivia d'Abo, and Mako co-star.

You know what's amazing? They call Conan a Sumerian hero, yet they then call him a Hyborian Age swordsman! How does that work? It's like calling Aragorn a "Numidian," then calling him a "Middle-earth warrior." Maybe Movies Unlimited is under the apprehension that the Hyborian Age was not, in fact, fictional, and that Conan was not a fictional character. It's not that weird: apparently five percent of 2,000 people polled in the UK think Conan was real.


By Crom! Everybodys' favorite Sumerian is back.

Conan's story takes place after the barbarian has ascended the throne of Sumeria.

Glorious: not only is Conan a Sumerian, but he's become king of Sumeria! Odd, I can't find Conan anywhere on the List of Sumerian Kings. Maybe they misheard Kalibum, Kalumum, or Kalbum, or something. I'm amazed they got "Crom" right.

If you saw Robert’s Red Sonja panel at Comic Con this year, then you know that directing a Conan movie would be a dream come true for him. Over the 60 minutes or so we spent with him there, he waxed poetic about his special relationship not just with the world of Conan the Barbarian, but with its creator. Heck, the guy actually lives in Conan’s homeland of Sumeria. No really! He built his house quite literally on the place which was creator Robert E. Howard’s inspiration for Conan’s fictional world.Heck, he’s already co-directing a movie based on Conan’s world in Red Sonja. Why not give him both projects and let magic happen?

Robert Rodriguez is without a doubt Conan’s number one fan.

Outrageous! So Robert Rodriguez somehow manages to usurp Glenn Lord (if anyone's deserving of the title of "greatest fan," by Crom it's him) despite not knowing the actual name of Conan's people? That's something. I doubt Rodriguez said that, it's more likely to be a hack mishearing "Cimmeria," and referring to Rodriguez' house in Austin, Texas--Texas being the home of Robert E. Howard. Still, I'm tickled pink by the idea of Rodriguez being some kind of uber-fan who built a house in the region which was once the domain of Gilgamesh, under the impression that it was Conan's homeland. Wouldn't it be wonderful for someone to go to his house, drink tea in the garden, have a lie in the hot tub, and shake his hand in goodbyes, before they finally whisper "Actually, Rob..."

The band appear to be big fans of Conan the Barbarian, and muster about the accuracy one can expect from a stoner band. The track listing isn't too bad. Some are sort of Howardian: "Sons of Set," and "Worms of the Earth" are there. Some are more generic: "Stygian," "Grim Grey Gods,"Zamora" and such. Predictably, there are Conan the Barbarian nods: "Thorgrimm's Lament," "King Osric," and "The Ballad of Subotai." But the 15th track is called... Hot Sumerian Nights.

Guess which track they use to title their entire album. 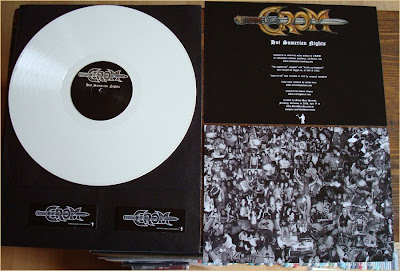 Just goes to show, Conan the Sumerian is live and well.
Uttered by Taranaich at 22:15