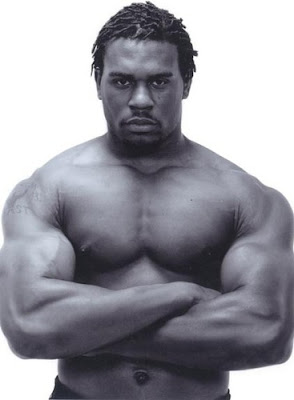 I've previously said that I really hope Shad gets the role of Ukafa, since it's his lifelong dream to be in a Conan movie. Well, the big dude's a step closer, according to his myspace blog.

“Good News, I’m past the first part of casting for the new Conan the Barbarian movie as one of the main villains “UKAFA”. Now it’s down to me and several others to see which one of us will go head to head with Jason Momoa. This role is as important to me as playing The Scorpion King in The Mummy Returns was for Dwayne ‘The Rock’ Johnson. I never ask my fans for much, but if you think I would be the best opponent to fight Jason Momoa in the new Conan the Barbarian film then I need you guys to hit the Conan chat rooms, forums, blogs, tweets, and message boards and let them know Shad Gaspard is the man when it comes to kicking ass and taking names on the big screen…..”

I'll vouch for you, big man!

Shad Gaspard is the MAN when it comes to KICKING ASS and TAKING NAMES on the big screen! He's a Brooklyn Boy done good, having payed his dues to society after a rough early life of crime, and I'm sure his momma, poppa and five brothers and sisters will be thrilled to see their boy up on the big screen! Let's do this, guys! Let's get Shad into Conan!

And you know, I'm totally serious. Well, not serious in manner, but I'm being sincere in wanting Shad to get the role he really wants. There's no hope for this as a Robert E. Howard movie, and negligible hope for a good fantasy movie. All we can hope is that it's good for something, and not just a waste of time for all involved. Shad as Ukafa wouldn't be doing Howard any more damage than the film already is, and the man's obviously got his heart set on it.

Momo seems to want to be in it, but it's clear that it's one of many jobs to him. I'm not accusing him of "not being dedicated enough" or anything, it's just an interesting contrast to Shad. Momo hadn't made any interviews up until recently despite being in the running for months, while Shad is all over MySpace. His enthusiasm is boundless. 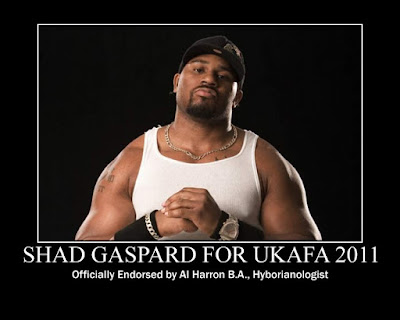 Labels: Conan the Rehash, Conan: The Wrath of Singh