(I have a post regarding the comic launch in the works, but until then, here's a quick post)

On a whim, I decided to pick this up back in March: 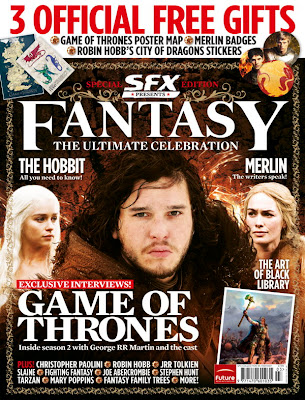 I guess with John Carter and fantasy/science fiction adaptations being on my mind of late, I wondered what they would have to say about the film before the John Carter Is The Biggest Flop Of All Time meme really went into overdrive. Turns out... not a lot.  And frankly, there's not a lot of many great fantasy authors for a supposed Ultimate Celebration.

Getting the obvious out of the way, there are about half a dozen mentions of Robert E. Howard and Conan altogether, most of them not particularly encouraging, of the "oh, but there's so much MORE to fantasy than Conan and all that silly nonsense" type.  The coolest soundbyte was from Slaine creator Pat Mills, which should probably come as no surprise to Slaine fans.  Mills makes a point of stating how Slaine was not really inspired by Conan, which is kind of perplexing given how other authors were bending over backwards proclaiming Tolkien's ascendency over their own works (particularly George R. R. Martin and Joe Abercrombie, and they're the poster children for low fantasy, ferchrissakes), but more importantly, he gave REH a thumbs-up:

"Conan wasn't an influence although I enjoy Robert E. Howard's stories. The dramatic device used in Slaine is very different - namely Ukko, who gets Slaine into situations Conan would never find himself in, like buying slaves or cheating when defeating a monster."


I could argue with the strength of that idea - Conan picked up Natala from a slave market and may well have dealt in slavery as a black corsair or Bamula chieftain, and Conan isn't averse to cheating against human foes, let alone monsters - but it's nothing worth quibbling about. I think it would've been nice to mention Bran Mak Morn and other Celtic British heroes given what he says next:

I don't think Slaine is better or worse for this. I think he attracts a new audience who want to see ancient Celtic legends brought to life and possibly puts off other readers who like an entire fantasy world. For me, it's important to challenge the way our ancient history and myths are represented. The Roman invasion of Britain is seen as a good thing, 'civilizing' Celtic savages. It helps justify imperialism and Slaine takes a polar opposite view.


Sound familiar?  This pro-Roman bias is still amazingly prevalent today: you have documentaries like "What the Romans Did For Us," films like Centurion and The Eagle, whatnot. And yet tales of Britain staunchly defending against invasion from the French, Spanish, and Germans are full of the sort of jingoism normally reserved for the Roland Emmerichs of the world. Needless to say, I still don't understand Mill's insistence that Conan was never an influence, since a lot of the things that make Slaine supposedly "different" from Conan are pretty Conan-esque in general.

In any case, it's a decent enough read, but calling it "The Ultimate Celebration" when so many authors are given short shrift - not just Howard, but Smith, Brackett, Leiber, Eddison, Dunsany and more are practically non-existent while Christopher freakin' Paolini gets a two-page interview and Fighting Fantasy is granted a 12-page overview -  is a little misleading. But hey, we got three Merlin badges and a dandy map of Westeros, so that's all right then.

In more current news, SFX recently ran a piece on celebrity Sci-Fi favourites. While I've never been a fan of the automatic equation of science fiction with geekdom in and of itself

FAVOURITE SF/FANTASY BOOK OR COMIC One of my favourite novels is Childhood’s End, by Arthur C Clarke. It’s nonsense in a way, with this idea of an event in the human future that resonates into the past and these aliens that come down to prepare humanity for the next stage of evolution. As a physicist, I’m damn sure that you can’t time travel into the past, but the wonder of sci-fi is that you can explore those existential questions. That’s why I love it.”
- Professor Brian Cox


(Tangent) Sorry Mr. Cox, but whenever I hear a scientist claiming something cannot be done, I just think of all those scientists who claimed space flight were impossible. Not that I'm generalising or equating time travel with space travel, I'm just saying human ingenuity has a habit of turning the "damn suredness" of science on its head. (Tangent deactivated) Childhood's End is one of my favourite Clarkes for much the same reason: exploration of questions. It's all good.

FAVOURITE SF/FANTASY BOOK OR COMIC “I think HG Wells’ short stories are some of the best science fiction I’ve ever read, but my favourite of his novels is The Time Machine. I first read it when I was about 14 – I read a lot of science fiction then – and it’s hard to imagine Doctor Who or Primeval without that book coming first.”
SCI-FI GUILTY PLEASURE “I’ve looked in on Second Life but the real estate prices were so extortionate I thought better of it. I’m a bit of an old-school gamer: I’m afraid it’s Tomb Raider for me all the way.”
- Ben Miller


A fan of Wells and Tomb Raider? Combined with his appreciation of Lem's Solaris (even if it is the Soderburgh version), Ben Miller is a man after my own heart.

FAVOURITE SF/FANTASY BOOK OR COMIC “I grew up on Piers Anthony – the Xanth series, A Spell For Chameleon and that whole series. And Edgar Rice Burroughs’s John Carter From Mars. Those were my two big ones that I absolutely loved, but I read a bunch – Dune, the Dune series. I remember John Carter was really sexy, and also the creatures they came up with. The good guys were Martians – his best friend had four arms and two legs. For a kid, it’s really healthy to be pushed in that way to use your imagination.”
- David Schwimmer


Slight misremembering of John Carter of Mars aside, for some reason I always suspected Schwimmer being a fan of that sort of thing.

FAVOURITE SF/FANTASY MOVIE “Silent Running. One of the first things I ever remember being moved by as a child – and it didn’t have a happy ending. Bruce Dern’s focus is fantastic, and the eco-message, which at the time seemed a little overstated, is now totally relevant. Cute robots and a nice Joan Baez theme. But, to be fair, I’m also of that generation for whom seeing Star Wars at the cinema was a mind-blowing experience.”
FAVOURITE SF/FANTASY TV SHOW “The X-Files was so brilliant for the first few series, like a movie every week, and then it got bogged down in its own continuity. I remember when The Prisoner was  repeated in the early ’80s and everyone went nuts for it – I still think it’s a superb period piece. And I think Star Trek: The Next Generation offers a workable philosophy for life. Just ask yourself, ‘What would Captain Picard do?’”
FAVOURITE SF/FANTASY BOOK OR COMIC “I love the whole Marvel Universe – my favorite would have to be Spider-Man, either the Stan Lee strips or the Brian Bendis ones. I enjoy pretty much everything Alan Moore does. As far as SF books go, I used to read Robert E Howard as a kid and then Ray Bradbury as a teenager, and then Vonnegut and Dick as an adult. I just read The Purple Cloud by MP Shiel and I enjoy finding obscure SF classics like that. There’s also lots of great books lurking in cheap ’60s and ’70s paperback covers too – Bug Jack Barron for example. I also like lots of old weird mystic stuff and I am a member of the Friends Of Arthur Machen society.”
SCI-FI GUILTY PLEASURE “I don’t feel guilty about any SF pleasure.”
- Stewart Lee


I gave Stewart Lee a really hard time back when he talked about REH and Machen back on The Today Show, but this shows when he sticks to things that aren't informed by '60s biographical pieces, he has a good head on his shoulders - he's a member of Friends of Arthur Machen, after all, which is more than I can say for myself. That he also loves Silent Running and The Prisoner is just grand, and I love that last quote.

FAVOURITE SF/FANTASY BOOK “I love Gene Wolfe: the Sevarian books are a kind of far-future fantasy that I think is my favourite thing ever written. The hero is an executioner travelling through a world so far into the future it’s like the Middle Ages. He joins a group of travelling players (as Death) and there is an incredible sequence when he hunts down a creature that takes on the intelligence of its victims as it eats them. I can’t explain how weird and how great it all is, you should read it.
“Another favourite of mine was Time Out Of Joint by Philip K Dick. There was a great biography of Dick recently – I Am Alive and You Are Dead. Check it out. Check out how nuts he was.”
FAVOURITE SF/FANTASY COMIC “I love all comics, good and bad. They’ve all got something. Mark Millar has a couple of really good comics out at the moment. Kick-Ass, about a nerdy young guy who sticks a superhero outfit on and goes quite mental, is my favourite book at the minute. For anyone who’s not read it, Scarab from the old Vertigo series was truly nuts, as was Peter Milligan’s Enigma.”
- Frankie Boyle


I'm a big fan of Frankie Boyle's more surrealistic humour rather than when he's in button-pressing mode, and I've found in interviews that he's a very concise and eloquent individual. So it's really surprising in the best way to hear a notorious comedian talking about Gene Wolfe's New Sun series as his "favourite thing ever written."


Ross earns my gratitude for giving Howard extreme props in his review of Solomon Kane, and it's clear that he really does like the man's work.

Finally, a bit of silliness: who would win in a battle of Westeros versus Middle-earth? MTV ambushed George R. R. Martin with a series of battles to decide who would win out of Aragorn vs Jaime, Frodo vs Tyrion, Saruman vs Melisandre, and more. Sorry George, but to put on my Fantasy Battle Referee shirt, Aragorn would beat Jaime. I also have my doubts with Tyrion winning over Frodo quite so easily: you do remember that Frodo walked through hell and back, right? I can only assume Elijah Wood's severely diluted Frodo might've clouded his judgement on that part.
Uttered by Taranaich at 11:17