Art of Time's Abyss: The Barbearians 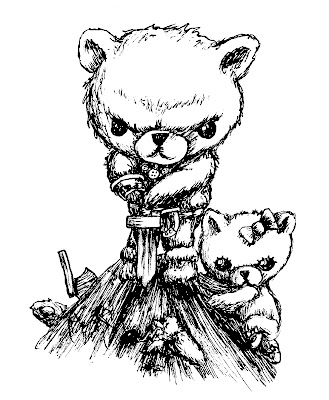 Know, O prince, that between the years when the oceans snuggled Tedlantis and the gleaming cities, and the years of the rise of the Cubs of Aryas, there was an Age undreamed of, when shining beardoms lay spread across the world like blue mantles beneath the stars - Bearmedia, Ofur, Bearthunia, Hyperbearea, Zambeara with its dark-furred teddies and towers of spider-haunted mystery, Zingbeara with its chivalry, Pawth that bordered on the pastoral lands of Ted, Gryzzlia with its shadow-guarded tombs, Bearkania whose riders wore steel and silk and gold. But the proudest kingdom of the world was Aclawlonia, reigning supreme in the dreaming west. Hither came Conan the Cimmbearian, black-furred,button-eyed, wooden sword in hand, a thief, a reaver, a slayer, with gigantic melancholies and gigantic mirth, to tread the jewelled thrones of the Earth under his sandalled paws.


A little piece of fun I'd been doing in REHupa was illustrations of Robert E. Howard characters, with a little twist - they're rendered as cuddly little cubbies all stuffed with fluff. And since it's been a while since I updated, I thought it would be nice to share some of them with you all. You can probably guess who this cuddly little guy is, but others might be a bit more difficult to figure out.
Uttered by Taranaich at 12:22