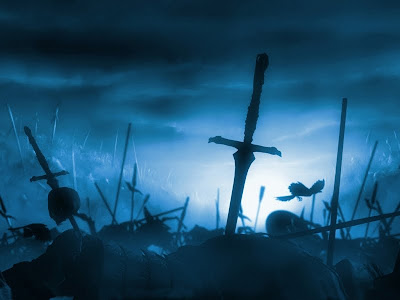 Hell of a week.

Just before the proverbial storm that will go down in Howardom legend, I added a quick link to Age of Conan's new free trial. It's the ludicrous system requirements that prevent me from going Mystery Howard Theater 3000 on Age of Conan (30 jiggabytes!?! My internet connection can barely handle 30 megabytes!), but since I bought the collector's edition for the velour map, art book, and the lovely box, perhaps there's a way I can take advantage. For an idea of what "Taranaich plays Age of Conan" might be like (should I ever get around to it), I direct you to one of my other favourite Internet-Fellows-To-Watch, Linkara, as he plays Star Trek Voyager: Elite Force. Hmm, wonder if he's ever read Bruce Jones' Conan run...

But the big event of the week has been the Maggie Van Ostrond debacle. In the span of two days, a veritable Siege of Fandomanium has raged and quelled over Maggie's absolute masterpiece of spin, sensationalism and scandal. As I said in my aftermath report, she has every single anti-Howard tract beat, all the more astonishing considering it was supposed to be from a fan! That's impressive in itself. In its wake, Conan forum veteran Amsterdamaged suggests "The Decampista Awards," to "honour" those folk who do most to set back Howard studies in character assassinations. I'm going to do my own commentary on the awards in a while, since everyone's probably sick of the whole mess.

Finally, some awesome news for those who've always wanted to see what the Jenkins edition of A Gent From Bear Creek was like. Sure, it isn't like having an actual copy of the tome like some lucky Howard fans, but even a facsimile would give me chills. I'm getting one.

So, what's in store for the coming weeks? The aforementioned De Campista Awards, with my own personal nomination (shhh, it's a secret!), will probably appear for New Year, along with a more positive "best of the year" post, about the best releases of the year. The final podcast for The Ship of Ishtar at Dial P for Pulp (featuring Deuce Richardson) will be reviewed, as well as my long-overdue musings on the previous two casts. I'm also going to do a post on Almuric, which was spurred on by Michael Enge's review of the new Paizo Planet Stories edition. Suffice to say, I have some serious bones to pick with Mr Enge's conclusions, not to mention the things he says about Howard fans during Maggiegate on Scott Oden's facebook. There's also the fact that Paizo gives little to no warning for the fact that the final chapter is almost certainly not written by Howard, and they choose the one guy I was praying they wouldn't use to write an introduction: Joe R. Lansdale.

Consider this fair warning, good readers.
Uttered by Taranaich at 19:27