Triangulation: Of Snow-Things and Female Hobbits 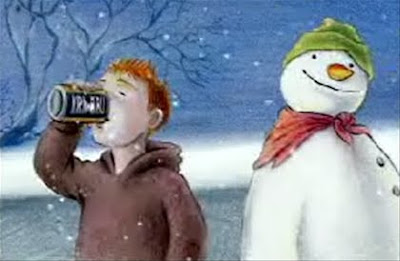 I neglected to put a Triangulation post for last week, sorry 'bout that folks.

Anyway, last weeks discussed the female casting call for The Hobbit. No sir, I don't like it, and I can't really add anything other than I really hope they don't put a dwarf in the gender-bender. Knowing my luck, it'll be Balin, my favourite of the dwarves, and the most noble and heroic of them. On the 'net, people seem to want Brian Blessed for Thorin, but I think he'd be far more suitable for Balin, being as he's also the oldest dwarf, and the one with the most screentime after Thorin. Brian Cox appears to be in the running for Oakenshield, and I consider him an excellent choice.

This week was a more fun post. I'd been enjoying Steve Tompkins' fantastically wry lampoons of beloved children's Christmas tales in the blood-and-thunder style of Howard: "Night Falls on Whoheim," a grim retelling of Dr Seuss' famous tale of vengeance and redemption, and "Bumbles Pounce", the tale of Yukon Cornelius & the Bumble given a "Valley of the Worm"-esque treatment of Man Versus Monster. Tragically, fate has meant that this little tradition looked to die with him, but I felt it would be a shame to let it lapse this year. As such, I present the Howard-Smith-Blackwood homage "Walking in the Air, with Burning Feet of Fire."

For those not aware of Raymond Brigg's timeless staple of British Christmas, The Snowman is a delightful story of a boy and his adventures with a titular snow-golem, with the classic Briggs bittersweet ending. A film adaptation was made in 1982, and ever since has been as integral a part of Christmas television for us Brits as How The Grinch Stole Christmas!, with truly breathtaking animation and a haunting score. There is no dialogue for much of the film, save the ethereal "Walking in the Air" sung beautifully by Peter Auty, adding to its universal quality. Naturally, us sardonic Irn Bru-imbibing Scots have our own tribute.

I noticed that there are a lot of chilling similarities between The Snowman and Algernon Blackwood's devastating tale of terror "The Wendigo," as well as thematic similarities to Howard's "The Frost-Giant's Daughter" and Clark Ashton Smith's "The Ice Demon." It seemed natural to pay homage to those wonderful tales, as well as some sly references to "The Coming of the White Worm" and "Red Nails." I finish with a dedication to the guy who inspired it all, Steve Tompkins. I still miss him.
Uttered by Taranaich at 09:10