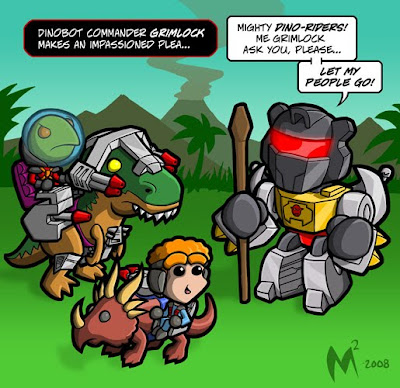 You know what I did this morning? I played the voice of a toy. Some terrible robot toys from Japan that changed from one thing to another. The Japanese have funded a full-length animated cartoon about the doings of these toys, which is all bad outer-space stuff. I play a planet. I menace somebody called Something-or-other. Then I'm destroyed. My plan to destroy Whoever-it-is is thwarted and I tear myself apart on the screen.

You know, it only just occurred to me that despite being listed third of my main interests up underneath the blog's title, I haven't really talked about Transformers that much. I'd been meaning to, though, especially things that I've noticed few really talk about: the themes, history and metaphors of the Transformers. Most people tend to dismiss the Transformers fiction as little more than a soulless means of advertising an increasingly commercialized childhood, and that's certainly how the comics and cartoon came into being. However, the various writers took the inherently surreal SF mantra of gargantuan robotic organisms that, somehow, transmogrify themselves into vehicles, and they ran with it. Bob Budiansky & Simon Furman are probably the most famous of these, the latter in particular famed for bringing some much needed explanations & gravitas to a setting that could so easily have become a campy, trashy mess.

For instance, there is a powerful link between Transformers mythology as devised in the Marvel comics and A. Merritt's classic The Metal Monster. I will probably do a Cimmerian article on that, discussing larger themes of alien robots in popular culture, not just Transformers. There are also minor things, like the themes of duality with Unicron & Primus (and Optimus Prime & Megatron), exploration of the nature of robots & sentience in the classic Asimov tradition, and remarkably complex character politics. Despite the seeming black-and-white nature of the Autobots and Decepticons, there are countless sub-factions, hidden motivations and constant scheming on both sides. Though nominally a suitable-for-kids fiction, the Autobots are not always triumphant, and frequently lose - once, they even surrendered! The writers also exploited the robot's inorganic nature to wreak bloodless carnage through the ranks, dozens of characters meeting horrific deaths and suffering monstrous injuries, all the while emphasizing the horror and futility of war.

All in a comic primarily designed to sell toys. Pretty damn good, I'd say. 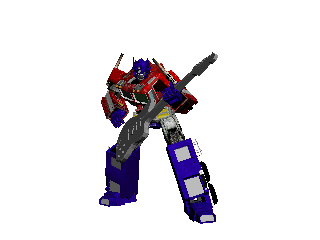 I generally ignore the TV show: in terms of writing, characterization and narrative, the comic blows it away. However, the voice acting and music were of an impressive quality, which is natural, given some of the greatest talents in voice acting are present: Frank Welker, Peter Cullen, Chris Latta, Casey Kasem, Alan Oppenheimer, Corey Burton, Charlie Adler. The Transformers: The Movie ups the ante with Leonard Nimoy, Robert Stack, Eric Idle, Judd Nelson, and astonishingly, Orson Welles. I can't help but imagine Cullen's powerful boom when I think of Prime, and Welker's menacing growl for Megatron.

Don't talk to me about the Michael Bay films. Just... don't.

I'm also a bit of a computer gamer. The only Transformers game I've played is the 2004 Melbourne House-developed Transformers, which only had three playable characters, and based on the recent Armada television series, one of many re-imaginings the Transformers have gone through over the years. Despite popular misconception, Transformers has continually produced fiction & merchandise from its inception in the 1980s: it did not disappear during the interim period between the original explosion and the newfound popularity of Michael Bay's "movies." Armada was middle-of-the-road as fiction went, not as memorable as the G1 comics or Beast Wars, not as dire as Machine Wars or Robots in Disguise. However, the game was excellent fun, and hinted at the potential a Transformers game could have that no other game could. How many games can you think of where the boss of an aircraft carrier level would end up being the ship itself?

It's unfortunate that so few Transformers games are out, but there's a new one on the horizon. Transformers: War for Cybertron is coming! 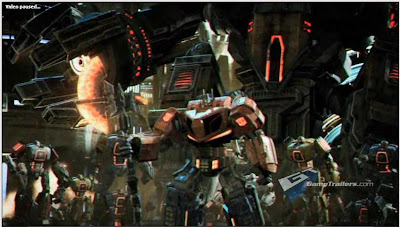 It appears to be yet another new continuity, but heavily inspired by the fantastic The War Within comic series. The War Within chronicled the events of the Great War prior to the Transformers' exodus to Earth, including the foundation of the Decepticons and Optimus Prime's ascension to leadership. It was remarkable for many reasons: offering convincing explanations for some of the Transformers' more ludicrous and bizarre features, full of political maneuvering and mythic spiritualism, all the while never insulting the audience by shirking from the dark reality of war. A sort of The Worm Ouroboros with robots. Some talented animators made a fan series, complete with voice actors: the first episode is here.

It would be wonderful to think War for Cybertron could have a storyline as engaging as The War Within, or even the recent Transformers Animated: I'd be content with a game that takes full advantage of its property. In the trailer, one sees the hulking form of Omega Supreme behind Optimus Prime: I'd love to imagine the game has Supreme's tank/rocket/base alternate modes playing a part. It would also be great if there was more variety in the playable characters. Optimus Prime seems a no-brainer, as does Megatron & Starscream. The setting does not necessarily forbid Grimlock his Tyrannosaurus alternate mode, seeing as Cybertron has its own mechanical ecosystem. I've always wanted to play as Grimlock: how can you not want to play a 50-foot robot with a flaming sword that can switch into a fire-breathing robotic T rex?

Time will tell whether it's any good. I really hope it is.
Uttered by Taranaich at 14:30