The Road to Acheron - A Saga in An Age Undreamed of

It seems like an eternity since I first went to Cross Plains. It leads on from the story of how I got into Conan. To recap: in the early 2000s, I picked up a copy of Fantasy Masterwork's The Conan Chronicles Volume One: The People of the Black Circle. I recognised the name from the plethora of Conan media, but to see it included in the Fantasy Masterworks subline (number 8 out of what would be 50) piqued my interest. Given that the first story I read (after the "Hyborian Age Essay" which I naturally ate up) was the magnificent "The Tower of the Elephant," of course I was hooked. Shortly after, I started posting on the late lamented Conan.com forums. I started to get acquainted with folk who knew a great deal about not just Conan, but his creator and his work. Over time, I mustered up the gumption to start this blog, & within time, I was nominated for a Robert E. Howard Foundation Award... which led me to Cross Plains, a shy, over-excited Strange Scot in a Strange Land eager to finally meet people who I'd been conversing with, and a pilgrimage to the homeland of an author whose work meant so much. Without exception, each of the regulars - and fellow newcomers - was generous, accommodating, and welcoming, and I'll never forget that.

Here are some of those gentlemen - complete with the mandatory Hawaiian Shirts and Sweet Hats - playing a bit of the newest tabletop role-playing game based on the Bard of Cross Plains' most famous creation:

Finn! Jeff! Indy! Grub! Todd! And... is that Mark there too? I know these weirdos! And even though I'm keeping up with them on their blogs and other sites, there's something about seeing them in the Howard house, a place I've been, playing a game that some of them worked on, based on recent scholarly explorations & contributions that I followed as it happened. While I enjoyed the Mongoose Conan RPG, it was beholden to the quirks & contradictions of the established pastiche material, which is fine for those who enjoy them. This new Conan, however, used the original stories as a basis, with extrapolations & suppositions delineated and contextualised. Sure, there was stuff I wasn't a big fan of - but since I'd taken a sideways step from Howard studies in pursuit of my country's future, I could hardly complain. Besides, the beauty of RPGs is the DM can alter and tweak as they see fit.

I miss them. I miss Cross Plains. I miss talking with them in person, seeing their faces, sharing stories and anecdotes. I even miss complaining about the ungodly heat and the demon mosquitoes and the weird sockets that look like they're screaming when you plug into their eyes. I miss immersing myself in the presence of an ancient landscape which was once the bed of a great sea, imagining fathoms upon fathoms of ocean above as Cretaceous life swims around. No wonder Howard's imagination spread to cataclysms, knowing the deep prehistory of his land. But there are ways I can feel connected to them beyond social media. 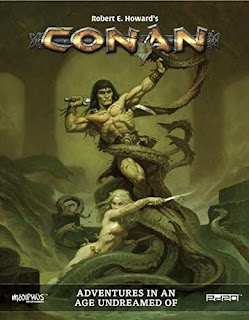 Not too long ago, I was introduced to a local tabletop RPG group. I had a brilliant time in each adventure across multiple systems, genres, and settings - Chaosium's Call of Cthulhu, White Wolf's many Worlds of Darkness, DC Adventures, R. Talsorian's Cyberpunk, Warhammer, the myriad Apocalypse Engine games, and more - and was eager to start running games as a DM. Alas, the gulf of time since my last dungeon-mastering combined with general anxiety made me reluctant to make a start... until now.

I've gotten to know the regulars at the group well enough to propose running a block of Conan: Adventures in an Age Undreamed Of. To my delight, I received more than enough interest to set up a full complement of adventurers. And so, last night, we began the adventure with character creation (a saga in itself, as any system that has a web application to help with the mathematics must be!), which we'll follow with an introductory adventure next week.

Now, me being an absolutely gigantic Howardist pedant, I knew that one of the possible obstacles to overcome was players' familiarity with the Hyborian Age. Most of them were at least familiar with the films, and others games like Conan Exiles - one even played Age of Conan: Hyborian Adventures back in the day. The question is, how much do I want to be that guy - the one who says NO to everything that a player would have no reason to think was un-Howardian given they appeared in official content? "No praying to Crom!" "No Riddle of Steel!" "No Greco-Roman Aquilonians!" Would I demand everyone do homework on the latest Howard scholarship? Well, I came up with what I think could be a good middle-ground - time will tell if it works out.

That elective decision is to set the game 3,000 years before Conan was born. This means that the ancient "bronze age aesthetic" so beautifully rendered in most Conan media by the likes of the legendary Ron Cobb wouldn't necessarily be as much at loggerheads with Howard's descriptions. Aquilonia, Nemedia, Argos, Brythunia, Gunderland, the Bossonian Marches, and the Border Kingdom thus do not exist, their predecessor tribes (The Men of Aquilon, Nemed, Argo, Brythu, Gunder, and Bosso perhaps being their ancestor-heroes?) lurking in the north; the elder Hyborian nations of Koth, Corinthia, and Ophir can lean into the more "ancient" look for Hyborian civilisations than from Howard's time; the distant realms of the Black Kingdoms and the Blue East may be familiar yet distinct, before Turan and the Hyrkanian Migrations; over all brood the ancient sorcerous empires of Elder Stygia and the Nightmare Empire of Acheron. This time of great upheaval and ancient horror, to me, allows for an interpretation more in-tune with what the players may have in their minds eye - and, perhaps, open up for some insight into Howard's original creation in the process.

This has the added bonus of removing the elephant-sized shadow in the room that is Conan himself: he can't barge in and take over the story like he always does (it is, after all, the Tao of Conan) if he doesn't exist yet. It also means a lot more room for stuff that bridges the gap between Hyborian and Thurian Ages - Atlantis, Valusia, and the Cataclysm was much more recent, after all, so there could be some holdouts that were long lost by Conan's time.

But this is all by-the-by -  pseudohistorical essays & worldbuilding might be my jam, but the power of the Conan stories is in the economy of detail among the action and atmosphere. "The Hyborian Age" and Nemedian scholarship is a necessary foundation to build a game world, but it not the space the players occupy - theirs is the world of story, adventure, and subjectivity, where the truth is only that which they can see and hear and touch. Just what nature of adventurers will be starring in these stories?

It is the memory rather than the light of dawn which wakes you, for it is always dusk in Acheron. You glimpse through a small portal in your cell, the only natural light in an unnatural world. Black clouds spiral like haunted whirlpools in the weird amethyst sky. You hear the distant thunder of stormclouds that never rain, the chittering and hissing of unfamiliar creatures, screams and howls from sources you dare not spending time contemplating.

Your cell is large enough to stand straight and lie flat, while being small enough to suppress your comfort. The masonry is typical of Acheronian architecture: smooth stone of a dark purple hue, with the individual bricks slotted together with uncanny precision, and without mortar. Channels and grooves in esoteric shapes thread through the surface. Skin contact with this rock is uncomfortable, like touching a lightning rod after a storm. There are no furnishings, only the hard floor – no one is expected to make a long stay in these cells...

In one cell paces Amatagt, an exiled Stygian scoundrel with the lean features, piercing eyes, & rangy frame of a desert vulture, educated on the battlefield and at home in the baking sands of the southern desert. In the cell to his left broods a man from practically the other side of the world: Dusan the Jolly, a tall & deathly dour Hyperborean warrior, born to a mercantile family & raised under duress in the savage court of his country. On the Stygian's right is an Argossean named Arcus, a hedonist fisherman whose curiosity got the better of him. Across from the vulture Kenyatta, a big Kushite wandering craftsman stares fiercely, unblinking, towards his ancestral nemesis. Across from the Hyperborean stands Kryxus, a proud & courageous Man of Gunder who has nothing to lose and everything to prove. Finally, deep in prayer to his patron, kneels Tiberius, a fallen Kothic Priest of Mitra consumed with rage on being trapped in the dark citadel of his faith's great foe. The other cells appear to be empty, with only a barely-discernible shadow belying the presence of a seventh tenant - Zafia of Zamora - in this Place of Chains.

Will these seven trapped souls leave this place alive? If they do, what will be the price of freedom? Will they work together to survive in this savage and merciless world, or will old feuds and ancestral hatreds tear their fire-forged alliance to pieces? Will this be a tale of High Adventure, a saga of tragic heroism, or a nightmare of dreadful horrors? Only they will know what they find as they walk...

Part One: The Seven Sacrifices

Part Two: The Children of Zukundu

Part Three: The Fall of Zukundu