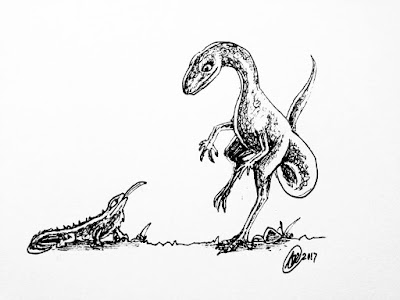 
Earlier this year, Matthew G. Baron, David B. Norman, & Paul M. Barrett have published a paper, A new hypothesis of dinosaur relationships and early dinosaur evolution. Pretty bold shake-up, but one of the coolest findings brings possible vindication for an old Scottish fossil!

For 130 years, dinosaurs have been divided into two distinct clades—Ornithischia and Saurischia. Here we present a hypothesis for the phylogenetic relationships of the major dinosaurian groups that challenges the current consensus concerning early dinosaur evolution and highlights problematic aspects of current cladistic definitions. Our study has found a sister-group relationship between Ornithischia and Theropoda (united in the new clade Ornithoscelida), with Sauropodomorpha and Herrerasauridae (as the redefined Saurischia) forming its monophyletic outgroup. This new tree topology requires redefinition and rediagnosis of Dinosauria and the subsidiary dinosaurian clades. In addition, it forces re-evaluations of early dinosaur cladogenesis and character evolution, suggests that hypercarnivory was acquired independently in herrerasaurids and theropods, and offers an explanation for many of the anatomical features previously regarded as notable convergences between theropods and early ornithischians.


Matt Baron spoke to The Guardian in an interview:

The most radical shakeup of the dinosaur family tree in a century has led scientists to propose an unlikely origin for the prehistoric beasts: an obscure cat-sized creature found in Scotland.

The analysis, which has already sparked controversy in the academic world, suggests that the two basic groups into which dinosaurs have been classified for more than a century need a fundamental rethink. If proved correct, the revised version of the family tree would overthrow some of the most basic assumptions about this chapter of evolutionary history, including what the common ancestor of all dinosaurs looked like and where it came from.

Until now, many scientists have backed the view that the first dinosaurs emerged around 237 million years ago on the ancient continent known as Gondwana, that would later become the southern hemisphere, based on a host of immaculately preserved fossils from South America and Tanzania.

However, the latest analysis identifies a Scottish specimen, called Saltopus, as the closest thing in the fossil record to what the hypothetical common ancestor might look like.

Matt Baron, the graduate student who led the three-year project at the University of Cambridge, said that while it would never be possible to pinpoint the origin of dinosaurs with certainty his findings placed the northern hemisphere into contention. “It may just be that dinosaurs originated in Scotland,” he said.


Now, one of the reasons I became sceptical of newspapers from a very early age is because of their – shall we say – limited coverage regarding dinosaur discoveries. Everything is “bigger than T.rex,” a “relative of T.rex,” or in some way compared to T.rex, because it’s the only dinosaur some journalists seem to think the public know. So, of course, my initial reaction is scepticism: as with anything, it’ll likely take a while for palaeontologists to fully read, digest, and consider the paper, before a consensus is found – especially something as controversial as what this paper proposes.

Yet ultimately, even if the paper is not adopted by the scientific community, it’s gratifying on a Scottish level to see a wee beastie that once hopped about what is now Elgin is still being talked about 107 years after its discovery, especially for such a mysterious & tantalising period – the world just before the dawn of the dinosaurs! While Scotland’s dinosaur discoveries are rare, it is a rich source for palaeontological findings. Indeed, the original fossil of Saltopus is so precious, it was kept in the British Museum of Natural History – though it had the occasional homecoming, receiving a hero’s welcome in Elgin Museum:

Elgin Museum was once renowned for its collection of fossils, which museum curator David Addison explained was due to the unique history of the surrounding area. “We are on what was basically deserts and sea beds,” he said.

“Half of Moray is an ancient desert; half is an ancient sea bed. We have the very early stages of life. We don’t have ‘younger’ dinosaurs, because they were scraped off the face of Scotland by the ice ages we’ve had.”

According to Mrs Trythall, there may be many more fossils such as this one, which originated from the Moray area but are now being displayed elsewhere.

“Many of these fossils were first discovered by people in Moray during the Victorian and Edwardian era,” she said.

“They were trying to help other scientists by sending them specimens. Some came back, and some didn’t.”

Although the last time little Saltopus was in the area he hung around for 220 million years, anyone who is keen to see him should hop over to Elgin Museum quickly; he’s only going to be there for three months this time round.

However, as Mrs Trythall points out “If people petition for it, then we could keep it for longer.”