"Did you hear about the newcomer, Caled?"


"Aye, Abar, I heard a stranger came ashore a few nights ago, with the Fin-Folk. What manner of man is he?"

"Well, he seems an earnest, simple man. He comes to share his religion with us, as part of some sacred duty bestowed on him by his lord. He says he comes from the Holy Land."

"No, much farther away, east and south. Farther even than the lands of the Agathyrsi."

"Thunder of all gods, that's a fair distance."

"He seems a far-traveled man. He has a great white beard and long flowing hair, like the grim druids of the Picts. His mane must once have been as black and curled as a Cymri's. I cannot tell his age, whether he is a young man hardened by a hard life, or an elder blessed with uncanny vitality."

"Aye, a fisherman, though he says he is now a "Fisher of Men."

"Don't be daft, man, it's a metaphor for his religion!"

"Thank the Moon-Woman! We can't have people who eat the flesh of men in Caledonia. So who are his gods?"

"Curious, to say the least. He has only one, which his people claim above all others, and who they look to in all things. He says his god is mighty indeed, and great miracles were witnessed in his name. Yet he is a gentle god, too, who offers his believers a place beside him in the afterlife, if they forsake their old gods and follow his ways."

"I'll imagine the other gods would not appreciate that!"

"No, indeed, the stranger says he has been derided, ridiculed, abused, beaten, stoned, assaulted, left for dead, even had his life threatened - usually by the Greeks or Romans. I'll wager he had a kinder experience with the Horse-women, Wolf-people and Fin-folk: tribes like us know many gods, after all, and so are more tolerant of those from other lands."

"The Horse-women and Wolf-people, too? Where else has he been?"

"He says he's sailed to the uttermost south where the sun boils the sea and burns mens' skin black as charcoal, the forests are thick with monsters, and entire leagues stretch where no plant or animal save the hardiest of men live; he went to the Far East, where he met men with the heads of dogs and horsemen who live their entire lives in the saddle; he dwelt among the people of the icebound North, where amber is scattered on the very ground and sold to the avaricious southerners for great wealth. I wouldn't be surprised if he eventually found his way to R'lyeh and Bal-Sagoth!" 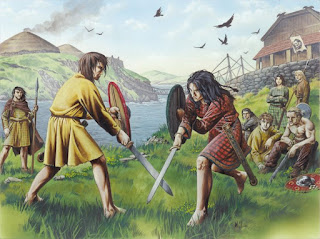 "God of Shadows, what a miserable existence it must be, for your land to be taken like that over and over by invaders!"

"Aye, and if the Pritanoi south speak true, the Romans might do the same to us. They have already conquered the south east of the island, filled it with their warriors and settlers, to the point where they now calling the land itself Roman! The Silures are sorely pressed; the Cornovi are scattered; even the mighty Brigantes are under siege. How much longer until they come to the Votadini, the Damnoni, even us?"

"Who knows, Abar? You would think if the stranger's god is so mighty, then he would have freed his people and smote the hated Romans."

"And are the gods of the Catuvellauni faring any better? The Trinovantes? The Iceni? The gods offer us inspiration, courage, and succour, but they do not fight our battles for us."


"True, Abar: they do not need to. We Caledonians are hard men, born out of shadowed hills, forged on the anvils of our mountains by the hammer of the heavens. We will not be conquered by force of arms: we will be avengers or enslaved, and we do not know such slavery. The tribes of Pritannike will have to unite to protect all our freedoms, to stand together against a force that will tear our children from us and name them "Roman," to take our gods and replace them with ours, and to turn our home into a wilderness - as they have done to our kin to the south."

"You would herd the warring tribes of Pritannike together like so many panthers? You would like this stranger's god, he boasts of such miracles!"

"I would hear more of his god from his own lips, Abar, when I meet him myself. Has this man not travelled uncounted leagues from a land where the sun is as warm as the hearth to speak of his god, coming even here, to us? Whatever it is he believes, his belief is strong enough to take him to the ends of the earth, for there are no lands beyond our islands. Whatever it is he sees in this god, it has given him the will and courage to embark on this quest."

"You know, Caled, there is something about this stranger. Even if we do not share patronage to the same gods, he honours us by choosing to come to our land. We must show him something more than the hospitality and welcome all peaceful travellers receive in Caledonia. Perhaps we should share our gods, see what we can learn from each other?"

"Aye, Abar. It's winter-time: he won't be able to return with the Fin-folk, who are used to the ice and snow; he'll likely stay with us in the long nights, until the weather relents next year. He came this far; the least we can do is offer him a hearty meal, and open ears."