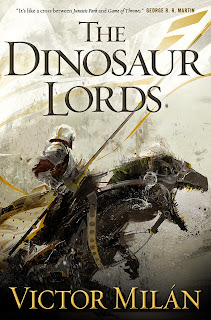 A world made by the Eight Creators on which to play out their games of passion and power, Paradise is a sprawling, diverse, often brutal place. Men and women live on Paradise as do dogs, cats, ferrets, goats, and horses. But dinosaurs predominate: wildlife, monsters, beasts of burden – and of war. Colossal planteaters like Brachiosaurus; terrifying meateaters like Allosaurus and the most feared of all, Tyrannosaurus rex. Giant lizards swim warm seas. Birds (some with teeth) share the sky with flying reptiles that range in size from batsized insectivores to majestic and deadly Dragons.

Thus we are plunged into Victor Milán's splendidly weird world of The Dinosaur Lords, a place that for all purposes mirrors 14th century Europe with its dynastic rivalries, religious wars, and byzantine politics…and the weapons of choice are dinosaurs. Where we have vast armies of dinosaur-mounted knights engaged in battle. And during the course of one of these epic battles, the enigmatic mercenary Dinosaur Lord Karyl Bogomirsky is defeated through betrayal and left for dead. He wakes, naked, wounded, partially amnesiac – and hunted. And embarks upon a journey that will shake his world.

So yes, it looks good. It still absolutely astounds me how comparatively infrequently dinosaurs pop up in fantastic fiction, at least compared to elves, dwarves, orcs and such like. There is at least one other "Dinosaur Knights" book out there: 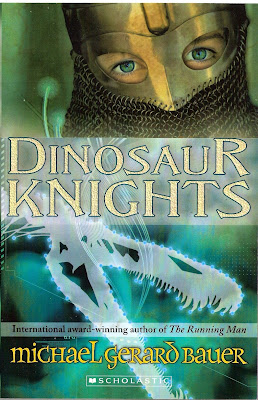 The opening in the forest before them was an eerie jumble of shapes and shadows … Roland and Oswald strained their eyes … finding imaginary monsters in the bulky bushes and arching tree limbs. Then they saw a real one.

Somewhere in the future a scientist is conducting the experiment of his life – stretching time to bring a living dinosaur to the present. But the giant prehistoric beast is stranded in the Middle Ages. There, a boy desperate to be a knight and his unwilling brother must face their fear and do battle.


Of course, the idea of humans riding dinosaurs goes back a while: Dinotopia, Dino-Riders, Xenozoic Tales, Turok, all the way back to F. Van Wyck Mason's 1931 ripping yarn "Phalanxes of Atlans." It goes hand-in-hand with the Lost World genre, but there's also a lot of science-fiction elements at play too, be it alien visitors or time-travel resulting in people playing bucking Brontosaurus.

But that "mirrors 14th century Europe" quote got me thinking... 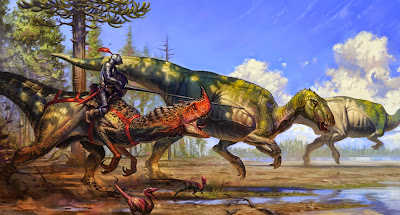 Let us look to Europe, in the Year of Our Lord 1346. The Kingdoms of France and England continue their bloody hundred-year struggle; English knights atop Megalosaurs, Iguanodons, Baryonyx, Cetiosaurs and Hylaeosaurs duelled French cavaliers astride Tarascosaurs, Ampelosaurs, Arcovenators, Dubreuillisaurs and  Poekilopleurons. The Iberian kingdoms wage war with their regional mounts - Aragon's mighty Turiasaurs, Castille & Leon's vicious Concavenators, Catalonia's hardy Pararhabdodons, Portugal's Lusotitans - against the Moorish Carcharodontosaurs, or among themselves. The Holy Roman Empire's proud regional troops seek their fortune in Europe: the Thuringian Liliensternus, the Bavarian Plateosaurs, the Saxon Europasaurs. The Bogatyrs of Hungary ride the steppes on Magyarosaurs; the Hussars of Poland thunder across the battlefield atop Smoks; the Rus defend their cities with Paludititans, Telmatosaurs, and Zalmoxes. 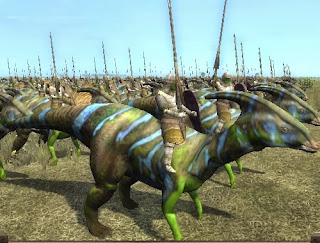 Yet it is not only in Europe that the dinosaurs reign: mighty forces lurk beyond the borders of Christendom. The Mamluks spread from Egypt, with great hordes of Spinosaurs, Bahariasaurs and Paralatitans rumbling across Africa. Beyond the Sahara, the grasslands of Africa tremble at the footsteps of the Mali Empire's Astrodons and Great Zimbabwe's Giraffatitans and Rukwatitans. The heirs of Genghis Khan's horde continue to assail Europe: the Il-Khanate's Tarbosaurs and Golden Horde's Achillobators rampage throughout the steppes, while the Chagatai Khanate's merciless Therizinosaurs war with the Yuan Dynasty's gargantuan Mamenchisaurs. Far to the east in the Land of Five Rivers, spectacularly armoured Titanosaurs carry the Sultan of Delhi into battle, against the Barapasaurs of Pandya and Indosaurs of Yadavas. 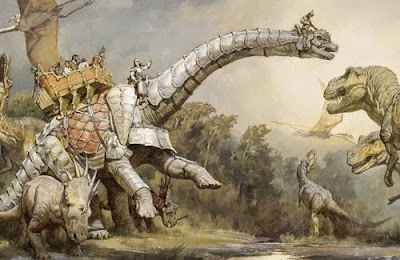 Farther still. Southwards to an unknown continent, where the People of the Dreamtime live with Australovenators, Muttaburrasaurs and Austrosaurs. Then, across the great ocean, another great continent, one filled with ancient civilizations and their saurian beasts. North are the mound-builders of Cahokia, the cave-dwellers of the Green Plateau, the riders of the Great Plains. South, to the tribes of the Silver Mountains, who ride huge Argentinosaurs and Giganotosaurs into battle. In the sliver of land connecting the two vast landmasses, the ancient civilizations of the Mayans, Chichimecas, Tarascans, Zapotecs, Tlaxcalans, and the Aztecs ride Latirhinus, Agujaceratops, Coahuilaceratops, Huehuecanauhtlus, Velafrons and Labocanias. 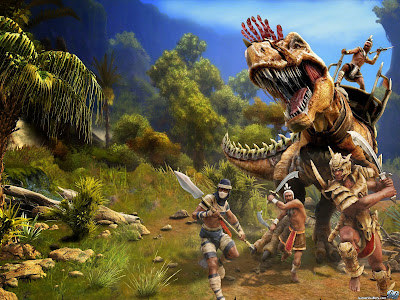 The world is different. Once-impregnable castles can be besieged by monsters which are practically walking fortresses themselves; the hammer and anvil tactic of infantry and cavalry obsolete when the cavalry takes so many forms; old ideas about dragons and serpents have to change with the predominance of the saurians. The very economic, technological and agricultural systems of the world altered with the productivity offered through dinosaur-power. And humanity itself is changed in the interactions with beings many times their size and might... 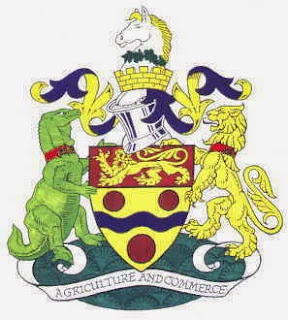 Also, this is the real coat of arms for Maidstone.

Labels: Dinosaurs, Dinosaurs from the Pulps!, Musings, The Pulps