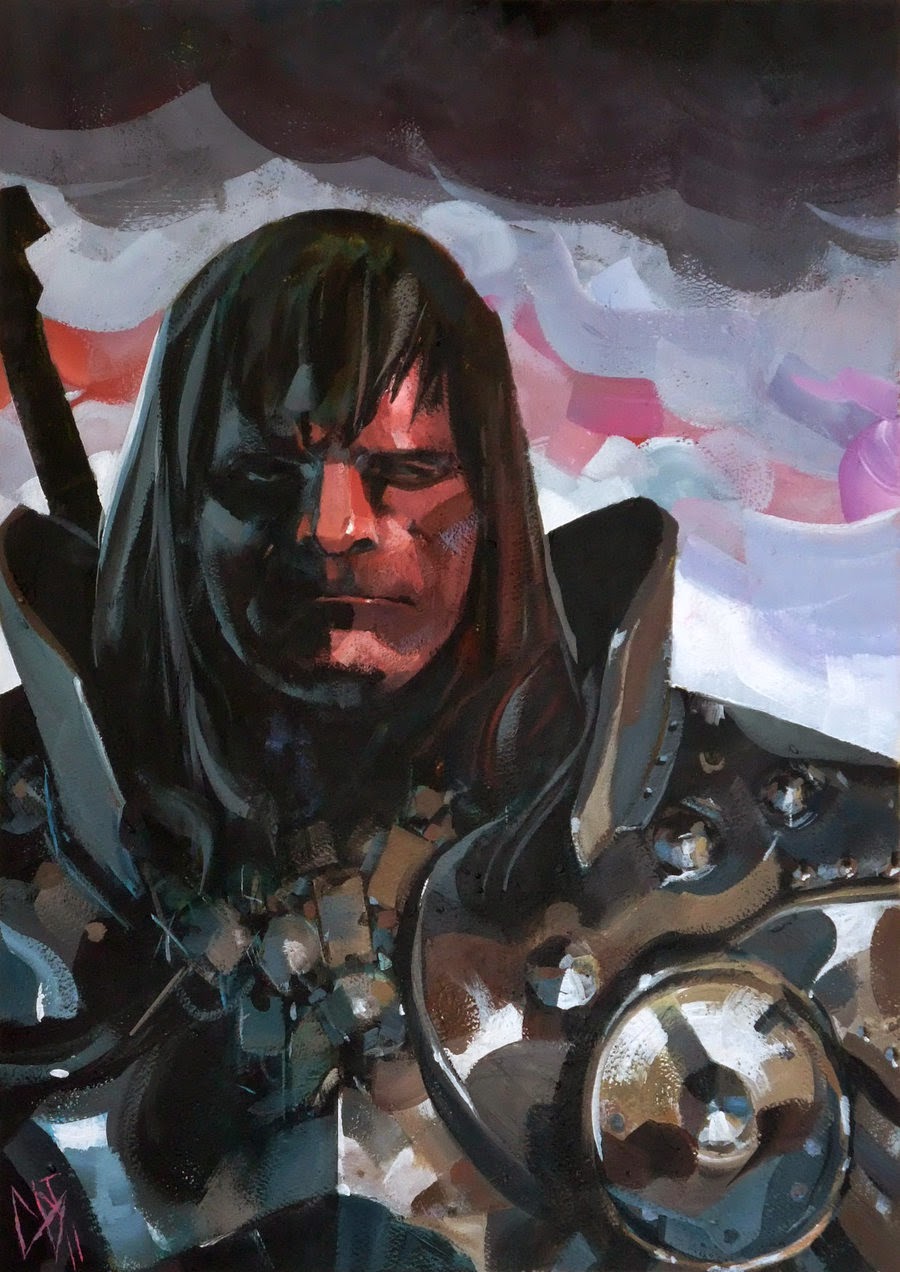 When I ripped the crown from Namedides gory head and placed it upon my brow, I proclaimed myself king. No priest or noble or seneschal placed the crown on my head: as you placed the future of Aquilonia in my hands, with my own hands I took the crown. Yet it is only with the consent of the people that I have mandate to rule; this being so, the Seneschal of Aquilonia, Count Trocero of Poitain, shall crown me in the traditional manner of the Kings of Aquilonia, as befitting a legitimate ruler.

I shall endeavour to serve the people of my kingdom with all of my might. My allies supported me with the full knowledge that they shall receive no special dispensation or consideration save just rewards for their service to Aquilonia. I shall confer with the Council of Nobles, but they shall not direct me; I shall listen to the words of the Priesthood of Mitra, but I do not obey their every whim; I shall consider the opinions of the guilds, but shall not defer to them. No man alive or dead commands me: I answer only to the people of Aquilonia.

I know that many of you object to a Cimmerian dynasty undermining the Aquilonian people's heritage. This being so, I hereby relinquish any and all hereditary rights to kingship for my kin: I shall make it law that a king may only take the crown of Aquilonia with the informed and undeniable consent of the people in a plebiscite. If I take a wife, or bear a son or daughter, then they shall only become ruler if they are deemed worthy by the people. I have not yet chosen a wife from the Royal Beauties, and though I offered them their freedom after years of neglect at the hands of Namedides, they chose to remain in the King's Service. I hope my subjects will grant me some time to determine a suitable queen!

My first act as ruler shall be to order a complete reformation of the kingdom's tax policy: for too long the people have suffered under punitive levies and fines, which has crippled the economic vitality of our agriculture and industries. Such policies are not only cruel, but destructive to all, for surely a nation that inflicts this ruin upon its own people only weakens it in the eyes of our neighbours? Were I not the one to usurp Namedides, surely Numa or Khossus would have instead - and they would not have liberated Aquilonia, but extinguished it by incorporating it into their own kingdoms.

As I am not born of Aquilonia, nor was I born into the faith of Mitra: I have known many gods. I will not tread upon his shadow, nor will I see his worship curtailed or suppressed under my reign. This freedom I shall extend also to all other religions, provided they do not infringe upon the rights of the people. If they are black magicians, how will they suffer you to harry them? If they are not, there is no evil in them. Crom’s devils! Let men worship what gods they will.

Most of you to whom I am speaking are refugees from the ruined city of Tarantia. As your king, I swear to you that I shall spare no expense in rebuilding your city to its former glory. In the meantime, I shall hold court here in the capital of Tamar: once Tarantia is rebuilt, I shall proclaim it the new capital of Aquilonia, in honour of the brave men & women who fought to defend it from Namedides' atrocities. I shall ensure that all the artworks, monuments and historical treasures which were confiscated will return to public hands, and those that were destroyed shall be rebuilt: a kingdom's history is its very blood, and it must be rejuvinated. Namedides' vast personal wealth shall be spent on schools, universities, and colleges, open to all with a desire to learn.

Many of my proposals may seem radical, but as a mercenary in Aquilonia's armies, I have seen the ruin the War of the Barons brought to this land. As a young shock-headed reaver, I witnessed the imperial ambitions of kings sacrifice good men of Gunderland and the Westermarck, all so they could retain their exclusive hunting reserves. As a thief, I have seen men die of starvation outside storehouses crammed with food, women sold like chattel, children fighting for scraps in the streets. As a warrior, I have seen the envious eyes of our neighbours eager to let Aquilonia tear itself apart in futile civil war, waiting for the moment to sweep in and take the spoils for themselves. I have seen much in my life, more than any king, and with this wisdom I shall remake Aquilonia into a just, proud, and mighty kingdom, one that shall be the envy of the Hyborian lands.

I allow those with a trace of the old royal lineage their right to life only on the condition that they never pursue the throne of Aquilonia - only the people of Aquilonia have that mandate. I am no Namedides, to slay a child because of their blood, but neither shall I stand threats against the safety of my people. Some of you are known, some may be illegitimate heirs. I shall not judge you by your blood, but by your actions.

And to my barons - for though I may be the heathen son of a blacksmith, I am not foolish enough to suppose I have no foes left among them - remember that while I may be king, I am still a warrior, a savage, and a barbarian. A wolf is no less a wolf because a whim of chance caused him to run with the watch-dogs. Do not presume my kingly status has tempered my wrath. Be aware that if I hear of your maltreatment of any of my subjects, then there will be nowhere you can hide your head.

But enough of this kingly business. Aquilonia has battled long, and the people are tired. So let us enjoy the rich juices of red meat and stinging wine on our palates - provided for by Namedides' personal venison and wine reserve; let us embrace, live and love, burn with life, and be content.

let me know the rich juices of red meat and stinging wine on my palate, the hot embrace of white arms, - See more at: http://disinfo.com/2014/05/conan-barbarian-spiritual-guide-crom/#sthash.pwmuwdce.dpuf

May Crom ignore and strengthen you all through the coming year.

I wish all Blog That Time Forgot readers and Howard fans a marvelous Mitramas, a super Set Sacrificial Festival, a solemn, cheerless Cromhain, and of course, a merry Christmas!
Uttered by Taranaich at 21:01