The Bones of the Old Ones 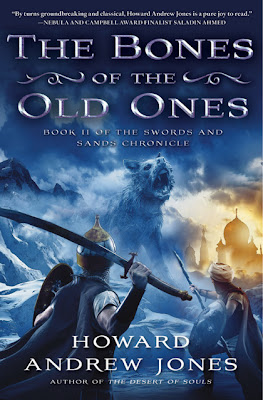 Technically speaking, I shouldn't be reading this book, since it isn't out in the UK. However, I just couldn't wait, so I ordered one from the US.

Howard Andrew Jones' The Bones of the Old Ones is part of the new generation of Sword-and-Sorcery, and very much in the tradition of its predecessor, The Desert of Souls. Indeed, the narrative structure is superficially similar to the first book: Asim & Dabir encounter a woman who isn't where she's supposed to be, they go on a journey with the girl to find magical macguffins, one of them falls for the girl, they pick up an elderly scholarly friend to help them out, and have to contend with evil sorcerers with unnatural constructed servitors, for The Fate of the Caliphate is in the balance. That isn't necessarily a criticism, of course, and it doesn't mean the tale is predictable or repetitive in the slightest. In fact, it offers something of a mirror image to Souls' plot, with the other member of the duo falling for Najya, and the pair's friendship and experience leading them to adapt better to unusual circumstances. Plus there are certainly enough differences in the details to make this more than a retread.

It seems a poor criticism indeed to say a book is "only" just as good as its predecessor, but The Desert of Souls was such a refreshing and surprising book that I suppose I couldn't help but be disappointed by whatever followed up. It's a peculiar habit of mine, where the first story I read is frequently my favourite. After all, you can only meet a character for the first time once.

Still, while Asim and Dabir were familiar to me, there were newcomers which I relished discovering. The Dawah Duo's home help is great fun, as are several incidental characters like Alexis, Kharouf and Abdul which I found myself drawn towards. One of my favourite things about Jones' writing - something REH does fantastically well - is how he can add so much character to tiny bit-players with a minimum of text, to the point where I was deeply concerned about whether Abdul would get back alive. I really love little characters like that almost as much as I love main and supporting characters, as they add richness to the world. Indeed, one of the best parts of the book involves Alexis, a character with only a few lines. Most interesting, of course, is the mysterious Najya, who manages to not fall into the Damsel in Distress trap by virtue of... well, you'll have to read and see. Suffice to say, I was pleasantly surprised, as I was concerned that Najya would fall prey to a certain narrative indignity to further the character development of Asim, but I needn't have worried. The female characters in general are much more developed and nuanced than in Souls, with a villain and another supporting character being extremely important to the narrative as well as fascinating.

But of course, what of the sorcery? Souls had some fantastic stuff there, with the decadent, world-weary djinn and those delightfully macabre servitors. Jones' djinn were fascinating for combining the familiarity of the figures from Arabian Nights with a deeply threatening sense of other familiar to readers of Machen, Blackwood and Lovecraft, along with a dash of the hyperintelligent, amused curiosity of Clark Ashton Smith's scholarly protagonists. Bones' supernatural elements are of a different kind, difficult to describe without going into detail, and although I found they lacked the chilling fright of Souls' beasties, they were certainly very weird and memorable. I particularly liked the, ahem, toys of one of the antagonists, as well as a being that gave me ideas for a Lovecraftian Christmas.

One thing that I wasn't a fan of was the appearance of Greek Mythological elements. I love Greek Mythology, of course - Jason and the Argonauts is one of my favourite films for its setting as much as Harryhausen's creations - but I think the folklore of the Fertile Crescent is strong and rich enough without the influence of the Greeks imposing. That said, Jones' reasons for the Greeks' inclusion is thematically appropriate with the conspiring Byzantines beyond the border, a natural extension of the Greek presence in Souls, and a nod to the works of Manly Wade Wellman, so it's more a matter of taste with me.

I think the best thing about the book is the central idea of winter in the desert. It's so rarely done that often times I forget to remember the cold, and so when there's a reference to snow or ice it feels oddly jarring, which only adds to the unnaturalness of the winter itself. It makes for an incredibly eerie atmosphere: where names like Asim, Dabir, Caliphate and whatnot conjure a sensation of heat and light, we instead find characters huddled around braziers to keep warm. Amazing how a comparatively minor thing can utterly transform the ambience of a story.

I've spoken before about how sometimes I don't feel like I'm a fan of Sword-and-Sorcery, so much as a fan of good Sword-and-Sorcery: I won't read a book just because it has barbarians and sorcery and whatnot. See, we already have tons of great S&S from the likes of Howard, Tolkien, Leiber, Moore, Smith, Moorcock, Brackett, Gemmel, Anderson, and all the old masters of yesteryear. But you can't just do a superficial retread of Conan or Elric or Jirel and expect to contribute more to the genre than simple fan-fiction: you have to bring something different, even if that's just switching to another ancient model. I often see supposed social justice crusaders spending tens of thousands of words on what's wrong with any given Sword-and-Sorcery story, but they rarely talk about what's right. They criticize the failings, perceived or otherwise, of the convention, but don't seem to bother giving support to works that defy those failings. There's certainly room for both forms of criticism, but I think there's an imbalance. I know I'm guilty of it, too, which is why I try to offset any negative criticism with an endorsement for something else.

In Jones' case, what I find most important from a social justice point of view is that he treats a rather sensitive subject with a sensitive hand. The history of Orientalism in western culture is fairly long and controversial. At the same time, there's a risk for certain authors who are not Muslim themselves to idealise Islamic history in a very patronising and almost fetishistic way. The irony is this method frequently ends up not being quite as respectful as they think it is, where they end up treating practises like the Salah and Hajj as an impenetrable, exotic mystery totally alien to western folks. Jones, on the other hand, treats his characters' faith with the sort of matter-of-fact, unpretentious attitude that befits them. This is, after all, completely normal for Asim and Dabir, and Asim simply assumes the reader is acquainted with the Five Pillars without going into extraneous detail for the benefit of westerners. This is such an important thing that I feel too many authors fail to do. And so, Islam and the Caliphate don't feel like a 21st Century American's impression of them: to this 21st Century Scotsman, at least, it feels genuine, or at least, a genuine attempt. There's only so much a modern non-Muslim can do to present an impression of the 9th Century Caliphate of Harun Al-Rashid, and I think Jones does admirably.

So I heartily recommend The Bones of the Old Ones, though I hope the UK edition has a cover more like The Desert of Souls.
Uttered by Taranaich at 13:52