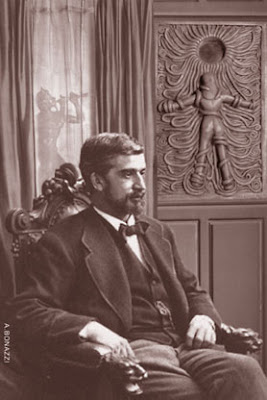 Image by the inestimable Andrea Bonazzi

The fault I find with so many so-called horror-tales (particularly including my own) is that the object of horror too swiftly becomes too solid and concrete. It takes a master of the pen, such as Machen and yourself, to create a proper SUGGESTION of unseen and unknown horror. The illusive shadows lurking at the back of the brain are so much more monstrous and blood-chilling than the children of the actual mind. I’m not saying this like I’d like to say it. But the rustle of leaves when there is no wind, the sudden falling of a shadow across a door, the furtive trying of a window-catch, the sensation of unseen Eyes upon one, these give rise to speculations more monstrous and terrors more cosmically icy, than any chain-clanking apparition, or conventional ghost, that appears in full glory. When a writer specifically describes the object of his horror, gives it worldly dimensions and solid shape, he robs it of half its terrors. Somewhere, somehow, there must lurk in the dim gulfs of our racial memories, titanic and abysmal horrors beyond the ken of the material mind. For how else are we able to half conceive and fear entities we are not able to describe? Seek to draw their images for the conscious mind and they fade away. We cannot shape them in concrete words. Well, I seem to be repeating myself without saying yet what I’m trying to say. But I’ll say this: humanity fears floods and starvation, foes and serpents and wild beasts, but there are fears outside these concrete things. Whence come these fears from the OUTSIDE? Surely in its infancy mankind faced beings that live today only in dim ancestral memories, forgotten entirely by the material mind. Otherwise, why is it we half-visualize in that other, subconscious mind, perhaps, shapes beyond the power of man to describe?
- Robert E. Howard, Letter to H.P. Lovecraft, ca. September 1930


A big anniversary for Arthur Machen, one of the finest practitioners of the uncanny weird tale, an influence on countless authors, and one of the great under appreciated progenitors of modern horror. For my part, I haven't written much on him: for whatever reason I never "got" The Novel of the Black Seal or The White People, so I guessed he wasn't for me.  But then I read "The Great God Pan," and man did I get it. He truly masters the technique of horrific suggestion in a way I've only seen equalled by Blackwood. I reread it recently, and it remains one of my top twenty horror stories. When I get back on 80 Years of Conan, I'll be discussing "The Great God Pan" and its possible influences on "The Frost-Giant's Daughter."

I don't have much else to say, so here's a great post on the man's work from Stewart Lee.
Uttered by Taranaich at 23:53