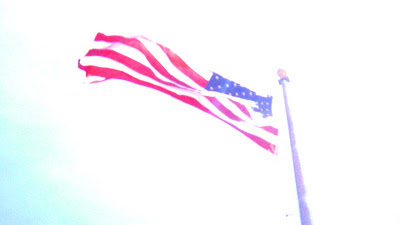 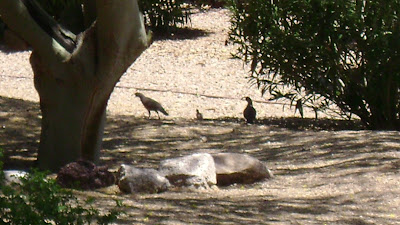 Behold, the Gambel's Quail. Look at these wee things. Titchy birds with bobbing feathers nodding over their heads, troops of chicks marching after their parent. They don’t look real. They’re Pokemon. What is that feather for? I bet it’s used for hypnosis to confuse predators. Or perhaps they sweep with them: you know those small birds that groom elephants and clean crocodiles’ teeth? Like that, but they sweep the rabbits’ burrows, keep them neat and tidy. Or maybe I’m being a bit too imaginative. It’s probably something mundane like a courtship aid, or communication with other individuals, or to shoot magic missiles at coyotes. 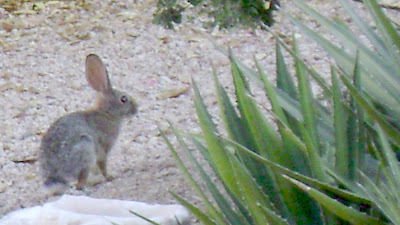 And then we have the Desert Cottontail. As if rabbits weren’t already dangerously adorable, these beasties are smaller, have bigger ears and eyes, and gambol about like playful children. If Monty Python’s taught me anything, it’s that these are the deadliest creatures on the continent, and no doubt the real cause of its namesake's "noble mind in ruins." 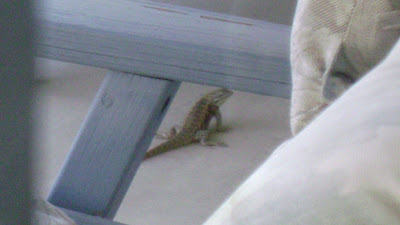 I couldn't even hazard a guess as to what this beastie is (well, aside from the obvious fact it's some form of reptile). It's probably one of the critters described here, but I didn't get a close enough look to be sure. Not many reptiles in Scotland: just the adder, the common lizard and the slow worm. No snakes so far, which is just as well, but I'm still on the lookout for jittery arachnids. Still, I don't entirely trust that lizard, the way it's nonchalantly looking over its shoulder at the big hairy ape daring to take its picture. It's almost as if it knows... something. I'm starting to see what Howard saw in reptilians' unsettling gaze. "...They are possessed of a cold, utterly merciless cynicism and sophistication, and sense of super-ego that puts them outside the pale of warm-blooded creatures..."

Quails, cottontails and lizards are as common in Arizona as herring gulls, capercaillies and haggises are back home. Outside of the flora and fauna, there are occassional man-made relics which perplex me somewhat. 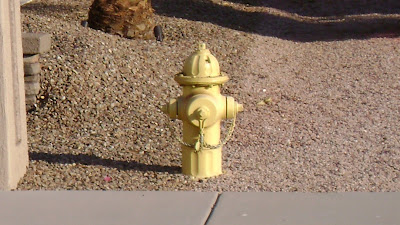 This is a fire hydrant. A yellow fire hydrant. Now, there aren't many of these fixtures in Scotland, Land of Dampness and Deep Wet, but they're there, albeit only as a wee yellow plate on the side of the road marked with a yellow "H" sign: as such, when we see above-ground fire hydrants, it's usually the familiar red one seen on Sesame Street and the like. So seeing a yellow one is a bit like walking into some mysterious mirror universe, where the sky is green, the sun is blue, Scotland dominates international football, and the Academy Awards are legitimate. It's a frightening place. 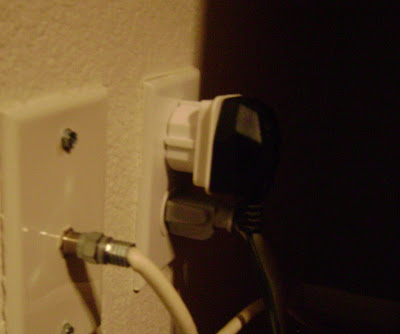 To flip things around, it never occured to me how blasted weird British plugs are. They're monstrous, unwieldy things that take up three times as much as those for American counterparts, have three prongs, and are only actually used by a handful of the world's countries. Using an adaptor just makes the thing look even more preposterous, and there's a change plugging it in with cause sparks to fly from the outlet. The great British Plug dates back to the aftermath of World War II and the copper shortage which necessitated a new design, unfortunately making absolutely no allowances for use in other countries. Even today, there are some twelve different types of plugs in use. One would think "can't we just adopt one and make things easier," but as with currency, language and region coding, countries tend to be very prideful and uncompromising, refusing to adopt something that's better because it would somehow undermine their national pride and culture. Even for plugs. 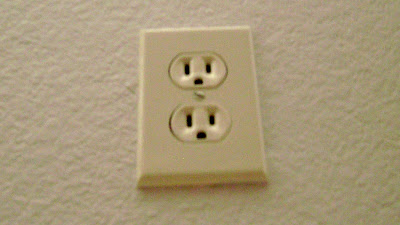 Did they have to make them look so frightened? Perhaps it's intentional: perhaps, by making the outlets resemble worried little cartoon faces, this will subconsciously reinforce the danger of electricity. "No, small child, don't stick your finger in my eye! Please! If you do, terrible things will happen!" It actually wouldn't surprise me if that's the case: pareidolia is recognized enough to be adopted by car manufacturers, and even now substantial thought and research has been placed in making universal warnings that can be recognized well into the far future. Or maybe it's just a coincidence. That tends to be the case with me.

This might be something of a silly and frivolous post, and I can only apologise for the long space between postings: for whatever reason, the internet at my local area has forsaken me, leaving me to borrow my relatives' bandwidth every so often. Until next time, I'll try and put up something of more substance.

*Alright, alright, I was levelling up Cyndaquil in Pokemon HeartGold. I’d brought the DS just as an added distraction, but there’s a reason it’s a gaming phenomenon. Just a few more gym battles and I’ll get my hands on Bulbasaur...
Uttered by Taranaich at 04:11