Transformers: Fall of Cybertron has a DINOSAUR TRANSFORMER


Not only will Grimlock be in the game, but combiners will, too - Bruticus was mentioned, leading me to hope that there will also be giant Transformers. War for Cybertron had separate levels for flying Transformers due to the obvious aerodynamic freedom offered, so why not have levels that centre around giant Transformers too?  I hope Grimlock (and the other Dinobots, please, High Moon?) is of a substantial enough size that he can throw down with Bruticus, and that his old nemesis Devastator makes an appearance too - either that, or have Superion combat the Big Bad Battlin' Dudicus.

I AM VERY EXCITED ABOUT THIS
A couple of criticisms on the 'Net come up, like "why would a planet of artificial lifeforms far from earth populated by humanoid robots that transform into vehicles have one that turns into a dinosaur." Most people fail to realise that the first part of that sentence is at least as ludicrous as the second, not to mention forgetting that the first game set the precedent for dinosaur Transformers:

So we have a planet with humanoid English-speaking robots that transform into vehicles... and dinosaurs.  This planet also has robotic spiders, slugs, birds and all manner of weird mechanical beasties.  In other words, it's Transformers, guys.  The only justifiable criticism I've heard is that Grimlock didn't have a dinosaur mode back on Cybertron as according to the recent comics, particularly "The War Within," which established him a using a tank.  I can see that: I just hope that High Moon offer an explanation.  Maybe he can be a triple-changer, transforming from robot to tank to dinosaur.  Even if it's just a dinosaur with treads whose head turns into a cannon.  Because that would be awesome in and of itself. 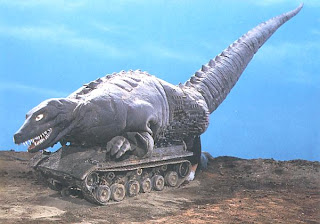 Why yes, in fact, something like this.
Grimlock is the Conan of Transformers in almost every way.  He is one of the strongest of all Transformers, possibly even stronger than Optimus Prime and Megatron themselves. His infamous difficulty with pronouns and brusque manner of communication conceal a fierce cunning and tactical intelligence unbeknownst to most.  He favours fighting with his sword, or even his bare hands and teeth, especially when in dinosaur mode. He and his fellow Dinobots are considered barbaric, crude and unsophisticated by more civilized 'Bots. Many Autobots wonder why he fights on their side at all: he's obsessed with war and battle, he has little concern for peace, and seems to be uninterested in defending the weak. However, for all his disdain for the weak, Grimlock despises the exploitation and abuse of the weak most of all, which means he will never ally with the hated Decepticons, and has an unspoken respect for Optimus' leadership and strength. Nonetheless, when Optimus was lost, Grimlock became King of the Autobots by his own hand - for a while.

I really hope High Moon can build upon the solid foundation of War for Cybertron. A longer campaign, more features, a greater variety of environments (from what I've seen, that's not going to be a problem), better creation tools for multiplayer, maybe the possibility of bringing a created Transformer into the campaign... How about it, guys?  While we're at it, I hope we see some of my old favourites from the comics: Bludgeon, Carnivac, Impactor, Nightbeat, Runabout, Runamuck, Thunderwing...

8-year-old Aly could not be reached for comment, due to running up and down the walls of the house screaming WOOO WOOO WOOO AMMA DINOSAUR RAAARRRRR and picking up and throwing small items of furniture like He-Man.
Uttered by Taranaich at 00:01