The Lost Conan Adventures: "Queen of the Black Coast," Part 4 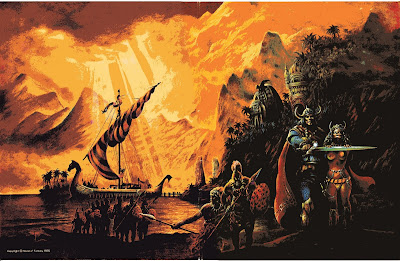 But That's Another Story
Every Conan story leaves a few loose ends before the end.  Sometimes they're obvious, like Olgerd Vladislav in "A Witch Shall Be Born": the last time we see him is his ominous ride into the desert.  Others are more subtle: the fate of Altaro, Orastes' acolyte in The Hour of the Dragon, is never explicated.  The roots of future adventures are ripe for exploitation, as Olgerd and Conan crossing paths once again could form the core of an entire story, while Altaro could be biding his time and consolidating his power for future malevolence.  Sometimes, it's as simple as wondering what happened when the story ended: what did Murillo get up to after "Rogues in the House"? Did Conan and Muriela go to Punt to continue their little con game after "The Servants of Bit-Yakin"?  Where did Conan take the Wastrel after "The Pool of the Black One"? 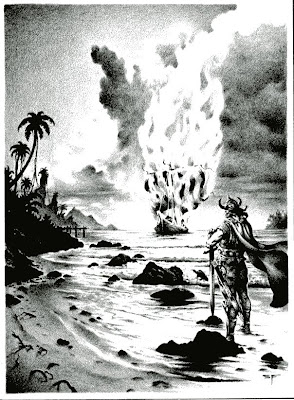 But That's Another Story
"Queen of the Black Coast" concludes with Conan watching the Tigress sail out to sea, burning into the horizon, his future uncertain.


Bêlit had been of the sea; she had lent it splendor and allure. Without her it rolled a barren, dreary and desolate waste from pole to pole. She belonged to the sea; to its everlasting mystery he returned her. He could do no more. For himself, its glittering blue splendor was more repellent than the leafy fronds which rustled and whispered behind him of vast mysterious wilds beyond them, and into which he must plunge.
- "Queen of the Black Coast," The Coming of Conan the Cimmerian, p145

Conan clearly has no intention of continuing his career as a corsair, at least for the foreseeable future. The only option open is to go into the dark, dense jungle, uncharted and unknown: how long would Conan roam through the trees before discovering humanity again?  Would he be alone in the wilderness for weeks, months?  What else is lying in wait for him in Kush?


Her escort were murdered,and she was dragged from her saddle and stripped naked by the mob, who were about to tear her to pieces when she was rescued by Conan, who had just arrived in Shumballa, a wandering adventurer who had recently been a corsair.
- "Untitled Synopsis," The Bloody Crown of Conan, p374
“I came here to seek my fortune. I was formally a corsair.”
“We have heard tales of you, whom men call Amra the Lion. But if you are no longer a corsair, what are you now?”
- "Untitled Synopsis," The Bloody Crown of Conan, p382

It seems possible that the "Shumballa" story was intended to be a direct sequel to "Queen of the Black Coast" in the manner that "The Black Stranger" was a sequel to "Beyond the Black River": however, there are problems. Conan's armour is slightly different, and he's wearing a scarlet cloak, which he had burned on the Tigress with Bêlit: did he have a spare? The fact that the story is unfinished might account for inconsistencies.


“Truces in this land are made to be broken,” he answered grimly. “He would break his truce with Jihiji. And after we’d looted the town together, he’d wipe me out the first time he caught me off guard. What would be blackest treachery in another land, is wisdom here. I have not fought my way alone to the position of war-chief of the Bamulas without learning all the lessons the black country teaches. Now go back to your hut and sleep, knowing that it is not for Bajujh but for Conan that you preserve your beauty!”
- "The Vale of Lost Women," The Coming of Conan the Cimmerian, p290
“It was a foul bargain I made. I do not regret that black dog Bajujh, but you are no wench to be bought and sold. The ways of men vary in different lands, but a man need not be a swine, wherever he is.
- "The Vale of Lost Women," The Coming of Conan the Cimmerian, p296

A personal belief of mine is that "The Vale of Lost Women" occurred shortly after "Queen," as in my mind, it explains a lot about Conan's behaviour.  Losing Bêlit and leaving the sea must have had a profound effect on Conan's personality, and I'd wager he might descend into a black depression. This would culminate in him losing a sense of self, a much greater lack of care for decency and human life, and degenerating from barbarism into savagery.  It's only when faced with Livia that he remembers the man he once was: a man with a barbaric code of honour, who would not harm a woman, who would not betray his friends, which he had lost after years of murdering, pillaging and slaying.  Juxtaposing "Queen of the Black Coast" with "The Vale of Lost Women" goes some way to explaining Conan's despicable personality in the latter if one considers that he lost the love of his life only shortly beforehand.

This is obviously contradictory to Dale Rippke's Darkstorm chronology, where he thinks that the story takes much later in Conan's life:

This is a Conan story that didn’t appear in the original Miller-Clark outline, because it wasn’t published until long after Howard’s death. Sprague deCamp placed the story between the death of Bêlit and Conan’s adventure in Shumballa. The story is grim and bloody and Conan is not shown in the most favorable light. It is almost certainly the least popular Conan story that Howard wrote. That being said, I am in total agreement with Howard scholar Joe Marek that this story takes place far later in Conan’s career than when deCamp places it. Marek argues that Conan has an appearance, attitude and outlook that is similar to the Conan that appears in another tale placed about this time called The Pool of the Black Ones. In fact, the two tales have a similar plot; Conan killing a leader for the possession of an attractive woman, with a supernatural element thrown in at the end. Marek also notes that Conan is missing the red cloak that he should have been wearing; a cloak he is wearing in Snout in the Dark (which comes after this tale in deCamp’s chronology). While those are good reasons, my opinion as to why this tale should have a later placement is because the Conan we see in this story is the natural outgrowth of his attempting to bring what worked for him in the East into the black kingdoms and finding out that it doesn’t work so well when everyone’s a brigand. He clearly doesn’t care much for where he is.  The Cimmerian war-chief describes this place as “hellish”, and he claims that he’s “sick at the guts” with the native women. There are no gold and jewels here; wealth is measured by cattle and horses. Conan is so immersed in the native paradigm that it takes a girl from the Hyborian lands to make him realize who he was as opposed to who he is now.

I believe those things which are used to justify a later placement can apply to an earlier one: where Dale sees this as a natural outgrowth of Conan bringing his eastern paradigm to the black kingdoms, I see it as a natural extension of Conan's time as chief of the black corsairs. Since Conan cannot stand the sight of the sea, it stands to reason that in his immaturity, he tries to replicate his success on the waves inland: however, he is not yet mature or confident enough to assert his dominance over his environment, instead allowing himself to be changed.  Why would Conan bother attempting to replicate the success of the east, which brought him gold and luxuries, in the Black Kingdoms, where the spoils are cattle and staple foods - and if Conan had already spent time in the black kingdoms, why wouldn't he know this?  Conan's attitude in "The Pool of the Black One" doesn't strike me as particularly similar to that in "Vale," either: in the former, he is still hearty, lusting for life and cheerful. In the latter, he is dour, cheerless and brutal, with nary a sign of the laughter and enjoyment in his occupation that he showed in "Pool."

Still, REH timelines are complex things, and it's doubtful we'll ever end up with one that's totally satisfactory.


And survivors of butchered Stygian ships named Bêlit with curse, and a white warrior with fierce blue eyes; so the Stygian princes remembered this man long and long, and their memory was a bitter tree which bore crimson fruit in the years to come.
- "Queen of the Black Coast," The Coming of Conan the Cimmerian, p129

The nature of the Stygian's "crimson fruit" is tantalizing, because it indicates that the Stygians did indeed result in some terrible, bloody event after the story ended. But what?  Did the Stygians discover that the king of Aquilonia was Amra, and exact their vengeance upon him?  Did Bêlit's predations on the Stygian navy result in the kingdom rebuilding their fleet to rival the rest of the Hyborian Age?

The Legend of Amra Grows


Conan's fame had preceded him, even into distant Keshan; his exploits as a chief of the black corsairs, those wolves of the southern coasts, had made his name known, admired and feared throughout the black kingdoms.
- "The Servants of Bit-Yakin," The Conquering Sword of Conan, p15

If one goes with the combined Amra-Bêlit theory, then Amra's legend among the black kingdoms was surely assured by the time of the Zarkheba voyage.  One wonders if Conan encountered problems as he wandered the black kingdoms on his way back to the Hyborian kingdoms...
Uttered by Taranaich at 00:01