I had a feeling Black Panther would be my favourite Marvel film for a while now. The first trailer indicated to me that this was going to be a film steeped in the lore, ambiance, and spirit of Africa. I've always loved that continent: the many peoples, the fauna, the landscapes. So much of my favourite pulp adventure - Burroughs, Haggard, Howard - is set in a historical, mythic, or fantastical version of Africa. But so many of these stories are written from the adventurer's perspective - someone going to Africa, where Africa is a faraway land of wonders and mysteries. From the African perspective, Africa is home: it's always been there, they've always been there. Black Panther, being the creation of two North Americans, started life as an outsider's interpretation of an African superhero. Black Panther, the film, seeks to bring him home.

The results are plain to see: an all-star cast and senior crew from all across the world, almost all of whom have a direct or ancestral link to the continent. It isn't an adventure so much as a homecoming.

The depth and richness of Black Panther could easily inspire thousands of words of critique and analysis, from the languages to the clothing; the architecture to the martial arts; the music to the dances. To demonstrate the film's profundity, I'm going to look at one seemingly tiny aspect of the film across three posts, and explore the possibilities and meaning therein - the Gorilla God of the Jabari.

Of Man and Ape 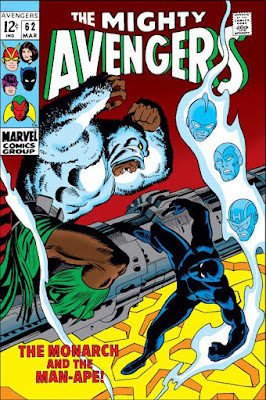 The character of M'Baku, created by Roy Thomas and John Buscema, first appeared in March 1969 in Avengers #62, as the supervillain Man-Ape. The historical association of the people of Africa and our simian cousins is one that'll be all too familiar to adventure and pulp fiction: as comics could be considered the descendants of the pulps, such associations join Orientalism and Egyptomania as recurring themes in Marvel, DC, and beyond. M'Baku could have been a tricky character to adapt in the 2010s: Marvel could easily have either subverted the character beyond recognition (as with Mandarin in Iron Man 3), whitewashed the character in a hamfisted attempt at cultural sensitivity (as with the Ancient One in Doctor Strange) or simply left the character back in the pages (which I'm fairly certain will be the fate of Whitewash Jones). Indeed, producer Nate Moore intimated as such in a statement about the character:

The character of M'Baku has always been problematic. Man Ape is an image that I personally find offensive, and can be offensive if handled incorrectly. But the idea of the character that we especially borrowed from the [Christopher] Priest run specifically, of this guy who is the head of the religious minority in Wakanda, that's fascinating. That's something that's real. That's something that we felt we could ground and give him a real character story that made him worth including. So defining the world of Wakanda and how M'Baku and the Jabari fit in that world was important in making that character work at all. Otherwise, we would have just taken him out. 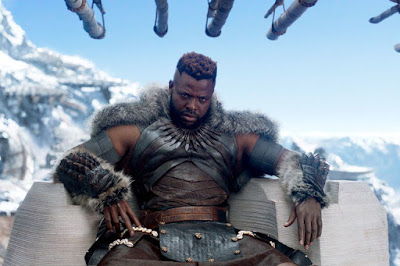 Luckily, Moore and the other filmmakers found a way: not only did M'Baku survive the cut, he positively shines in the film - a highlight in a film dazzled with such stars. M'Baku offers a masterclass in reconciling such a character with modern sensibilities by simple reinterpretation, as Winston Duke, the actor who brought him to life, explains:

The Jabari tribe is known for worshipping the gorilla god Hanuman; in the original comics, M’Baku was actually introduced as “Man-Ape,” a name abandoned by the film adaptation for obvious reasons. But by contextualizing the Jabari religion, Duke found an elegant way to sidestep negative or racist perceptions: “They haven’t been affected by colonialism and all the narratives that are associated with developing a sense of inferiority and people comparing them to animals,” he says. “To them, this is just who they pray to, and they find their strength and agency in this religion. So being a bit gorilla-influenced was a sense of pride for them.”

He also came up with certain ape-inspired characteristics for the film, including a scene in which the Jabari men grunt at an outsider who speaks without permission—a threatening cue for that person to shut up. To find M’Baku’s voice, he researched and imitated Nigerian accents, further separating the character from the South African-inspired T’Challa. It’s just one of many ways the Jabari differ from the city-based Wakandans, who largely worship the panther god Bast.

“The panther is sleek, the panther is sneaky, the panther is covert—meanwhile, the gorilla will show up and bang on his chest and make noises to warn you about what is about to happen if you continue to cross the line,” Duke says. “We don’t hide, we don’t sneak. We come through the front door.”


Black Panther's depiction of M'Baku and the Jabari are a fine example of how to reject cultural insensitivities by taking the associations used against them, internalising them, and expressing a positive interpretation: making ideas meant to hurt and belittle into a source of power and pride. Before colonisation and the traducing of Africa's culture by invaders, apes and monkeys were revered and venerated as much as lions, elephants, rhinos, or any of the charismatic megafauna of that great continent. Comparing black people to apes, particularly gorillas, was meant to dehumanise black people, to equate them with beasts, brutes, monsters - a comparison which insults not only human beings, but our fellow primates. 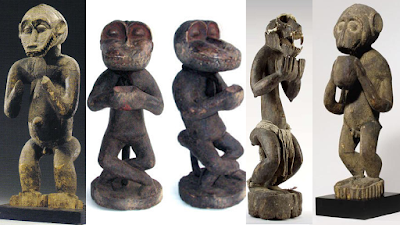 A nation which isolated itself physically from colonialism could also protect itself from the narratives that rose from its flames, as Duke says in another interview:

I needed to know who I was playing. I needed to know if I was just playing M’Baku or if I was playing Man-Ape. As an actor, it would dictate how I play that very differently. I wasn’t worried about playing a guy that was called Man-Ape, because I actually felt within this world or Wakanda, that’s never been conquered, that’s never had a lot of narratives and false narratives place upon it, a character who’s not been exposed to internalized inferiority about animals and being animalistic, he wouldn’t embody that. To him, that’s a source and place of pride.

Yeah, if he was Man-Ape, I felt that I could justify it. But I understood the larger context of the world we do live in, what that would mean and how that would come off, and I also respect it. For me as an actor, I could understand playing a character named Man-Ape and making him be proud to be that. I also understood that we are making a movie that is also of our time and the responsibility of that.


To call a human a monkey or an ape was offensive because Europeans, not Africans, found monkeys and apes offensive. That this paradigm is still used in such a hateful and despicable manner in this day and age is a grotesque affront to hominids everywhere. Black Panther, however, does not shy from the gorilla associations, but instead celebrates them. How?


The Jabari as depicted in Black Panther are distinct from the other tribes of Wakanda. Their city may be constructed of wood and stone, but their constructions are no less impressive than the technological marvels of Wakanda itself. They don furs and wooden masks carved in the image of their revered deity. And, most memorably, they evoke their patron vocally with their intimidating war cries. Yet we also find they have deep social bonds and ettiquette, are quickly moved to aid as well as harm - and their veneration for the gorilla evokes modern sensibilities of gorillas over pulp fiction that was informed by inadequate science. 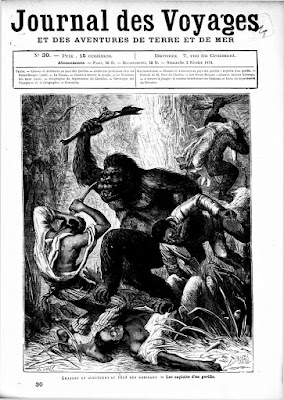 It's sometimes surprising to remember that gorillas were largely figures of mystery and myth as recently as the mid-19th Century, and it wasn't until 1920 that a full, modern scientific expedition was undertaken. Gorillas, and Great Apes in general, were depicted in popular culture much as they had since the time of their discovery by western science, from Emmanuel Fremiet's hugely influential Gorille enlevant une Femme through to King Kong and other perilous apes. Indeed, the notion of the "white-fanged ape-man" was not fully challenged until Dian Fossey's paradigm-shifting work in the 1960s.

By casting off the outdated, damaging misconceptions of the anthropophagous, brutal, incongruously libidinous Great Ape that emerged from their recent discovery, and replacing them with what we know of the Great Ape after decades of research - a herbivorous, sensitive, complex creature - Black Panther deftly shows what can be done. Gorillas are no longer poorly-understood man-eating monsters, but animals as beautiful and magnificent as any other life-form, no less gentle for their strength, no less intelligent for their instincts. This is beautifully encapsulated by the Jabari in a scene in the film which I won't spoil, but provoked hearty laughter from all in the cinema when I attended.

As Duke says in in an interview with CQ:

There's just so much—just the idea that your hero is using kinetic energy that's meant to harm him, and he redirects it and uses it as his power—if that's not an allegory for oppressed people, I don't know what is. [laughs] Internalizing negative energy and using it for your empowerment.


There's much more to cover: the name of M'Baku's god, how it came to Wakanda, and unexpected connections to An Age Undreamed Of...