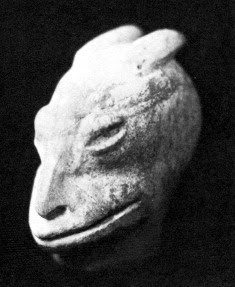 He and his followers were well armed and accoutered. Some of the men bore coils of rope and grapplinghooks to be employed in the escalade of the steeper crags. Some carried heavy crossbows; and many were equipped with long-handled and saber-bladed bills which, from experience, had proved the most effective weapons in close-range fighting with the Voormis. The whole party was variously studded with auxiliary knives, throwing-darts, two-handed simitars, maces, bodkins and saw-toothed axes. The men were all clad in jerkins and hose of dinosaur-leather, and were shod with brazen-spiked buskins. Ralibar Vooz himself wore a light suiting of copper chain-mail, which, flexible as cloth, in no wise impeded his movements. In addition he carried a buckler of mammoth-hide with a long bronze spike in its center that could be used as a thrusting-sword; and, being a man of huge stature and strength, his shoulders and baldric were hung with a whole arsenal of weaponries.
- "The Seven Geases," pre-dating the current D&D Everything's Better With Dinosaurs craze by 80-odd years


125 years marks since the birth of Clark Ashton Smith. 2018 marks several other important anniversaries in the world of weird fiction, in particular dinosaur fiction. Because of this, I'm going to take inspiration from Mr Smith, & decide to finally do a thing that I've been wanting to do for years. I'll explain more in a future post.

Mr Smith wrote dozens upon dozens of extraordinary stories & poems: even if he doesn't receive anything like the recognition he deserves, his influence is clear among those who have shaped the worlds he lit up with the sparks of his prose.
Uttered by Taranaich at 23:49