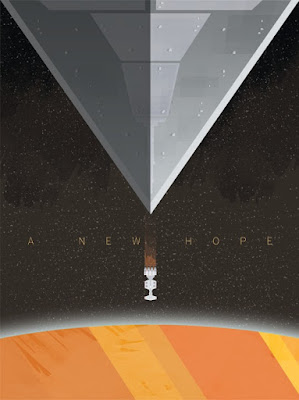 
Before that first time watching A New Hope, I dabbled in the periphery of the Star Wars Galaxy. I remember playing with my friends' toys as a wee boy - not knowing the names, I mostly remembered them as "the robot Baluchitherium," "slug man," and "pygmy Bigfoot." The humans bored me - much preferred the beasties, like the "caprosaurs" (even then my palaeontological obsession meant I was making faux-latin names for fictional species). I caught a bit of Return of the Jedi on tv - the Harryhausen-esque monster scene which alternately thrilled and horrified me. And I remembered those pygmy Bigfoot things had a cartoon.

As I grew up, I became an avid enthusiast for Star Wars games - X-Wing; Rebel Assault; Shadows of the Empire; Dark Forces and its sequel - my all-time favourite Star Wars game - Jedi Knight. Aside from the occasional guest appearance or reference to the original trilogy, most of these were standalone adventures within the Star Wars galaxy - no substitute for films. They were easy enough to understand: just as its spiritual ancestor Flash Gordon was the tale of heroes against villains in the scientific romance of space opera. It is easy to get into once you buy that theatrical ticket. 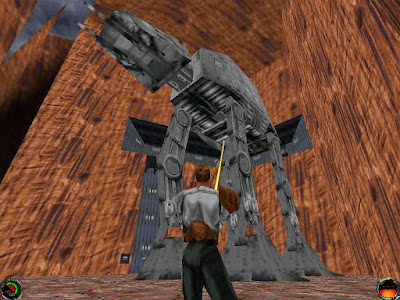 Jedi Knight really excelled in conveying sheer scope: I've never played a game before or since where I felt so very small.


So when I'm roaming the streets of Nar Shaddaa as Kyle Kataarn, flying through space as Rookie One, or stalking Xizor's palace as Dash Rendar, I tend to simply appreciate the scale and splendour of the universe. Hard science-fiction enthusiasts tend to categorize Star Wars as "space fantasy" or "space opera" rather than science fiction: I agree, for the simple basis that Star Wars isn't telling that kind of story. It's a visceral, visual story, of strange sights and incredible scale, presenting the grandeur of space without necessarily tying it to our current and rapidly changing understanding of science.

And yet, to this day, these games "feel" as "Star Wars" to me as the original trilogy. Even without the dynastic turmoil of the Skywalkers, the adventures of the Millenium Falcon and her crew, and all the other elements which some would say "make" Star Wars what it is, I think of Kyle Kataarn, Rookie One, even Dash Rendar. There is no disconnect for me, where the Expanded Universe is necessarily inferior to the films in and of themselves. There may be bad stories or characters or adventures, but they never feel like they don't belong in the same universe. That even extended to the prequel trilogy. Yes, really.

I believe this is because when I think of Star Wars, it is the galaxy I think of - not the individuals whose stories we follow through the episodes. Say "Star Wars" to me, and I don't think of the great battles, or the memorable lines, or the characters. Star Wars isn't a biography, or even a space opera to me: it's sight and sound. I visualise the cosmic arrowhead of a Star Destroyer plunging through the stars, the sight of two suns setting, the vision of metal doom striding across the snow, a grim spider luring his prey into a steel web.

I hear the unmistakable pang of a Stormtrooper's blaster, a TIE-Fighter's scream as it soars through the void, the almost-living thrum of an elegant weapon from a more civilized time, the laboured respiration of a fallen knight, the score - the score! - wrought from centuries of orchestral tradition. 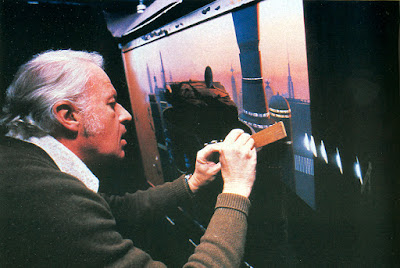 Without taking anything away from George Lucas et al, there are dozens of people who I would say deserve no small credit in creating Star Wars - Ralph McQuarrie preeminent among them.


I imagine the world - worlds - drawn, crafted, forged, sewn, composed, animated, played and painted by so many artists. While the characters and events from the films were not present in the games, the sights and sounds - creatures, ships, technology, planets - were. And that's what makes Star Wars, Star Wars, to me.

It's with this frame of mind I watched The Force Awakens. As long as it had the music, the sounds, the breadth of design for creatures, places, vehicles and droids I came to expect from Star Wars, it would be Star Wars to me. I'm not a J.J. Abrams fan at all - but I love the works of those set designers, concept artists, creature creators, matte painters, costume weavers, and other creatives who brought the galaxy to life. Actors, directors, even story and plot did not matter as much to me as the worldbuilding. And for all the frequently-cited flaws of the prequel films, perhaps the most damning was that there were all too few of these "moments" which simply took the audience's breath away.

This is one of my favourite shots in the trailer for the new film - and indeed, the entire series. It is a single pan to the right, following a tiny vehicle crossing the desert, passing a fallen X-Wing in the foreground, with the wreck of an Imperial Star Destroyer half-buried in the sands of a desert world. An entire story is told with no words and no speech: the relics of an ancient battle fought miles above the world's surface, now silent monuments to that forgotten conflict. That is the sort of thing that I love in Star Wars - visual storytelling, one that transcends language and cultural boundaries which can block oral or written storytelling.

This was not an isolated shot: The Force Awakens is full of beautifully formed compositions from the very first scene. Say what you will about the prequels, but the opening shot for Revenge of the Sith was a marvellous long take, until now second only to A New Hope's incredible debut - because The Force Awakens beat it. It was a great start, and there were many scenes throughout the film that simply took the time to present a beautiful image - the play of light and shadow in a vast chasm, tiny human figures framed against enormous structures, ancient ruins juxtaposed with advanced technology, and creatures. Plenty of creatures. 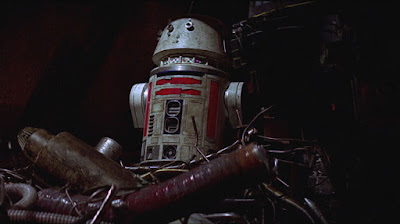 The world is just not ready for Skippy the Jedi Droid...

It's often said that every character in Star Wars has a long, winding backstory in a comic or novel or video-game tie in, from that "malfunctioning" droid the Jawas tried to palm off on Luke's uncle, to the chap with the elaborate earpiece on Cloud City, to Jabba the Hutt's cackling toadie. While I can understand the weariness in quantifying such characters who spent only a fraction of a minute on screen, the idea of all the denizens onscreen having a life beyond what the audience sees is surely integral to the very idea of worldbuilding, isn't it? Who hasn't seen an extra in the background of a film and wondered what their story was, or a strange detail that seems to hint at a larger narrative? Such things are the stuff of which worldbuilding is made of, from Indonesian rodents of unusual size to nameless things that gnaw at the earth. 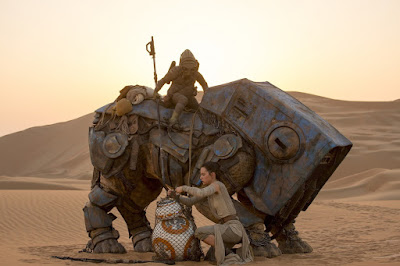 Such bizarre, wondrous creations owe as much to Mœbius and Métal Hurlant as they do to the Golden Age adventures of Lensman and Flash Gordon: beings metal and flesh, some both, and others somewhere in between. Grand artifices and constructions which seem to defy our paltry understanding of the laws of physics bring the film solidly into the realm of space opera. And while characters and cast members from the original trilogy do appear, the newcomers don't feel entirely out of place either. They speak, act and think like young people, while the original stars are only older in crude matter - not in spirit.

Overall, my impression is that The Force Awakens is to the original trilogy, what the original trilogy is to the 1930s Flash Gordon serials: a meeting of nostalgia with the fresh vigour of youth discovering what came before, and creating something new out of something old. Flash Gordon was old when Star Wars was new - but now Star Wars is approaching its 40th anniversary. There is a new generation who are born into a world where Star Wars already exists: they can never truly experience it in the same way as those who watched it at the premiere in 1977. It's like how watching the Apollo missions now cannot replicate watching it live - Star Wars has become part of the lore and legend which new generations interpret, shape and reinvent.

The ancient Greeks told their own stories about the great heroes: they even got all the heroes together to go on a quest in a well-known crossover. The Britons did the same. It's a great source of narrative, the power of story. It's like when a grandchild discovers their grandparent's old comics in the loft: they bring the box down, and the two generations sit down and flick through the pages. It's like a parent handing down their cherished toys to their offspring - but not before they have a play themselves. It's the old explorer having one last adventure to recall their youth, before sitting back in their chairs, and seeing what the young people get up to as they follow in their footsteps.

It's fan fiction of the best kind. 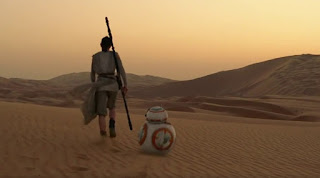