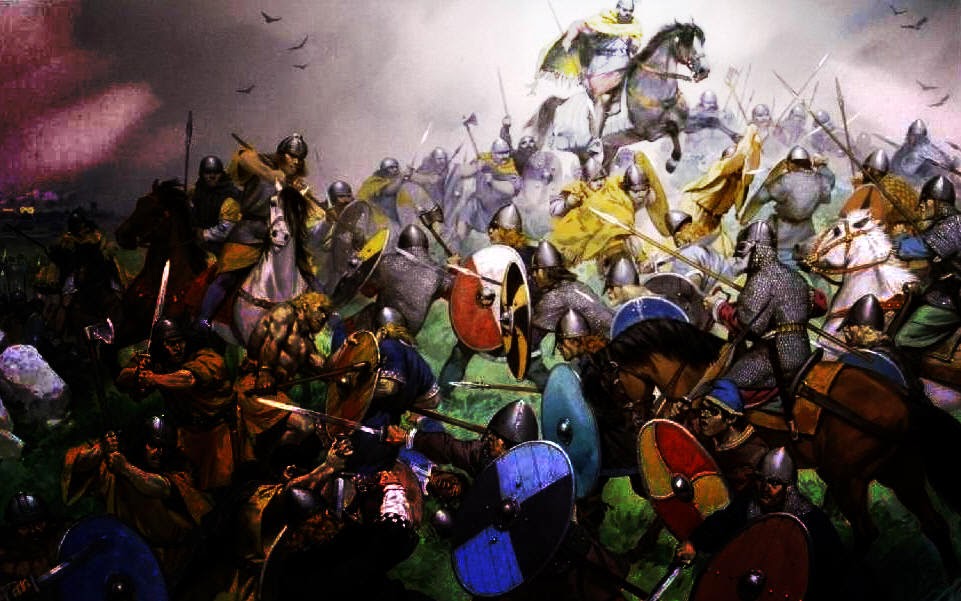 You may, or you may not have noticed my work in Weird Tales, Oriental Stories, Ghost Stories, Fight Stories, Action Stories, and Argosy; but that doesnt matter so much. The point is, I’m deeply interested in the intention of your company to bring out a new magazine devoted entirely to historical tales. I want very much to do business with this magazine, and would appreciate any pointers you might give me as to how to make the market [in case this story is not acceptable]._ I realize that editors do not have time to give detailed criticisms; but just a line or a few words scrawled on a rejection slip would help me wonderfully.

I’m hoping you can use this tale – “Spears of Clontarf” which I am enclosing. It deals with a phase in history too much neglected by writers – that of the Dano-Irish wars which culminated in the final shattering of the Viking power at the battle of Clontarf. Those days of war and rapine represent an age crammed with vital drama, enough to supply a hundred thrilling volumes.

In writing this tale, I have dipped deeply into both history and legendry, striving to interweave historical facts and folk-lore myths in a realistic and logical manner. It is my belief that practically all legends have some solid foundation of fact, though they may be so changed and distorted as to be unrecognizable. Thus, in the case of Dunlang O’Hartigan, and his sweetheart, Eevin of Craglea, the guardian faery-spirit of the O’Briens, I honestly believe the legend had some such basis of fact as I have presented in this story. As you know, the legend represents Eevin as presenting her lover with a magic mantle making him invisible; he threw it off in the heat of battle, Murrogh crying out to him, and was instantly slain as she had predicted. It is my honest belief that the girl who later became the wife of Craglea in the legends, persuaded Dunlang to wear some sort of armor – the Irish of that day generally wore none at all – and in the legends that sprang up about the great battle, that armor became a “mantle of darkness.”

In gathering material for this story I have drawn on such sources as Joyce’s “History of Gaelic Ireland”, “The Saga of Burnt Nial” Spenser’s “View of the State of Ireland”, “The Wars of the Gaels with the Galls” and other histories. I hope you can use this story; if not, I would, as I’ve said, highly appreciate any tips you can give me as to making the new market. I’m also interested in the other new magazine you are bringing out – the one devoted to weird and bizarre stories – more especially as I have been a regular contributor to Weird Tales magazine for about seven years.


Today marks the auspicious anniversary that is the 1,000th year since the Battle of Clontarf!

Such a momentous event was one of Howard's favourite episodes in history, as commemorated in "Spears of Clontarf"/"The Grey God Passes," alluded to in "The Cairn on the Headland," and echoing throughout his work. Keith Taylor has a fantastic series on the Two-Gun Raconteur blog, of which the second part is now up. There is endless, fascinating discussion of Howard and the Irish, including the battle and the main participants, at the Robert E. Howard Forums and "The Grey God Passes" own thread. It's a board game. It's even a Cauldron Born track.


Got to slip in a little metal somehow!

"The Grey God Passes" was, of course, a primary influence on Bannockburn, but the battle itself is at least as vital to the mythic history of Ireland as Bannockburn was to Scotland: both saw disparate peoples united under one king, who put aside their many bloody feuds to drive out invaders intent on conquest. Sadly for the Irish, this brief moment of unity was not to last, as successive new invasions from the Normans, English, and even the Scots threatened to unite Ireland under non-Irish rule. It wasn't until the 20th century that the fierce people of Ériu were once again under a single banner.

The question of Irish nationalism, unification and whatnot is beyond the bounds of this blog, naturally. But in terms of historical and cultural significance, the Battle of Clontarf cannot be overstated, as the forging of a common folk heritage for an island nation.

Lean on your sword, red-bearded lord, and watch your victims crawl;
Under your feet they weakly beat the dust with their dying hands.
The red smokes roll from the serf?s roof-pole and the chieftain?s shattered hall?
But there are fires in the heather and a whetting of hungry brands.

The peaked prows loom like clouds of doom along each broken port;
The monks lie still on the heathered hill among the fallen stones.
Over the land like a god you stand, our maidens howl for your sport?
But kites await in the heather to tear the flesh from your bones.

Clouds and smoke for a broken folk, a lash for the bended back?
Thus you roared when your crimson sword blotted the moon on high,
But sea breaks and the world shakes to the battle?s flying wrack,
And Death booms out of the heather to nail you in the sky.

And of course Manilla Road have a song based on a Robert E. Howard story on their new album!
Uttered by Taranaich at 22:22