The final day! Getting to bed early meant rising early, so I did something very special: sketch cards! I was so inspired by the Sketch Cards panel that I decided to make some myself to commemorate the convention. I decided to make it a theme representing my artistic career: Melville, a fairy, Kalina, and my new character Caledonia from the Bannockburn comic. 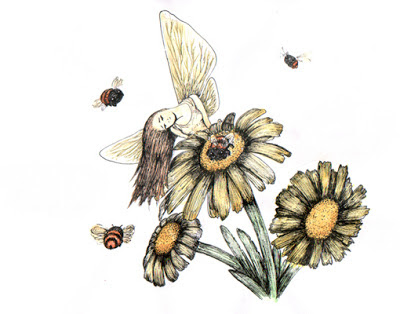 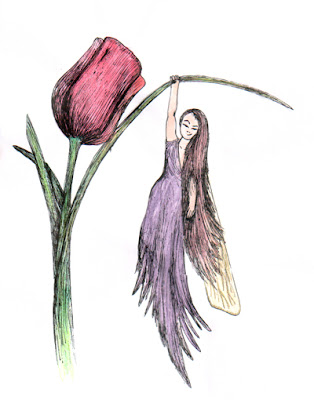 Oh crumbs, posting old art is like looking at my embarassing baby pictures - why do I do this to myself?


Melville you're all acquainted with, as well as Kalina, and though I've still not said much about Bannockburn's plot, you can probably tell from context who Caledonia might be. But fairies? You? Al Harron? The guy who loves dinosaurs, robots, barbarians and other such rough-and-tumble Traditionally But By No Means Exclusively "Boy" subjects? Back when I was in my early teens, for some reason I loved the idea of drawing fairies in the tradition of Claude Arthur Shepperson, Arthur Rackham, and Brian Froud: watercolours and inks, mostly, with a few embellished with gold, silver or other metallic pens.  I had a bunch of them, most of them very whimsical and silly: a fairy watching bumblebees, a fairy coyly hanging from a tulip, a little warrior fairy riding a mouse with a hatpin sword and button shield...

It's probably the closest I've come to pinup art in my career. I'd love to do pinup art, and from what I've been told I'd probably not do too badly at it. I'm a Frazetta fan, of course I'd love to draw sonsie lasses dressed in cuttie sarks with hurdies like distant hills and breasties all a-panickin'.* Yet considering how bashful I am with my U-rated art, you can imagine how I'd be about (gasp) fruity ladies! Nudes are a different matter: they're expression of the human body, clinical and scientific, not as much sex involved. Still, even if I did try my hand at pinups, I can't resist poking too much fun at the idea: I'd always want to give them a silly expression, or put them in some ludicrous situation that's more funny than sexy.  Oh bother, I've spent too much time talking about that on my blog, good gracious!


I worked furiously until time for breakfast, by which time I was nearly done with my sketch cards. We went down for breakfast after packing, then I excused myself early. I also wrote some little messages on the back. I think I might look into this sketch card business...

I'm going to take some special time to give proper thanks and appreciation to my great-aunts and grandmother for being such dauntless, constant companions throughout my adventures. See, I'm absolutely terrified of flying. Not of crashing - though that's always a fear - but the very process of air travel drains every last drop of energy I have: getting through customs, being patted down (happens every year, either I'm just too unlucky, suspicious or so cuddly security can't resist), being packed like a sardine for over ten hours hurtling through the air. I couldn't do it alone. But Les Girls? They're travellers: they've had guns pointed in their faces in foreign airports, they escaped a plummeting death from a mountainside on a Mediterranean island, and I'm sure there are even more tales of derring-do they haven't shared with me. They're unflappable and unbeatable - ideal travel companions to put your mind at rest.

And they're great company, too. They love Star Trek, old Doctor Who, Quatermass, Buck Rogers, Hitchcock, Christie, classic films and literature - just as they influenced my mother, I'm sure they've influenced my own reading habits. So when they come to Comicon, they may claim to be the "oddballs" for not wearing a costume, but the truth is, they're bigger geeks than I am. So when I saw John Barrowman was available for a photo op, I thought it would be a lovely present to them, for being there to make sure I didn't get lost in a strange land. So Gran, Joanie, and Teen: thank you for the adventures. I may grouse and groan, and we may have failures of communication, but I'm glad to have you all with me.

Anyway, after breakfast, we had to wait around at the hotel, because our family friends' daughter was coming to pick us up. We decided Joanie would stay, and we went to get our friend a ticket. Then we found the queue for John Barrowman's panel, and ye gods... I can't believe the Aunties actually thought Barrowman wasn't going to be a big star in America, because the queue for the panel half an hour before the ballroom even opened was gigantic! While I would've loved to have seen Mr Barrowman's panel, there were just too many people - at least as many as there were for Bill Shatner, maybe even more - so I said I'd look out for Joanie and our friend. They appeared seconds later, so I said I'd take our friend out and about for a walk.


In the meantime, if you hear Scottish-accented laughter in there, you know who that is!


This was our friend's first comic convention, and it certainly made an impression on her (and she made an impression too, I think!) Since we had some time before Barrowman, I decided to go around to some of the friends I've made, many of whom I've mentioned before and can be found in the "Art" category to the right. After that, our friend treated us to a coffee. We had a nice talk about things, life, politics, etc. and people-watched for a bit. No sign of Granny & the Aunties even though the panel should've been over, so I bought her a packet of popcorn. We were just too late, as they were all out - but about to pop a fresh batch. So we waited, and watched the corn pop! Delightful.

At that point, we got a phone call from Gran: apparently Mr Barrowman was pleading with the organisers for ten more minutes, and because he's Mr Barrowman he got them! So we got to the queue, which was far shorter than I expected. Then I realised we had cut into the cue after a couple were momentarily stopped. I felt bad about it, but we only cut in near the end, so the couple were completely fine about it. Thanks, couple!

We waited for a wee while - Mr Barrowman did an impromptu signing beforehand, the lad has boundless energy - and then he came out to address the crowd, telling them just to relax and have fun. So I had ordered four tickets, aiming for the three ladies to get one picture each, and I'd use mine for a group photo. Now, what we and John shared in those few minutes was very special: he's a national treasure, after all, and so we shared in a very heartfelt moment together. Maybe one day I'll write about it in my memoirs, but for now, I'll just say he was a genuine and wonderful individual, and I'm very glad to have met him, if only for even a few seconds.

So I gathered the aunties in a big hug as we left, and we went off to find our friend. All that was left was to say goodbye! So many great new friends I've made: Val and Scott, Denae and Robert, Natali and Kyle, Jolene and Dana, Jan, and more. Many tearful and emotional hugs were had. There are plenty of others I've met and other little convention bits-and-pieces I haven't talked about yet, though I will in the final post, and it was a really excellent experience. There's only one really big thing I would rather was different, but that's how it is.

*I fear I've let this metaphor run away from me. Damn you, Robert Burns!
Uttered by Taranaich at 06:49