A Knight's Moment of Glory 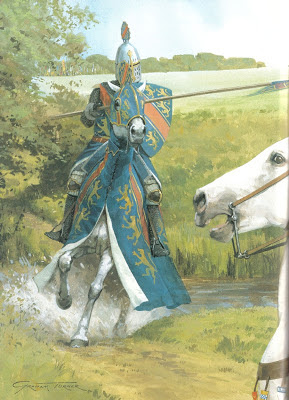 It's bloody wet, Scotland. I hate it. Damn near killed John-boy in the march up, he'll be lucky to live the march back. I'll make a squire out of him yet. Lost a horse on the way up too: hobbled itself in a bog. No matter, my destrier is watered and rested, we outnumber and outmatch the Scots, and we have Giles d'Argentan. What glory we'll bring to England, to finally unite Britain under one king, under God! I just wish our king's father lived longer, to see his work done at last.


But my king has impressed me of late. This is the largest army ever marched up north. Greater than Agricola's legion, Godwinson's host, even the Hammer's forces. He's marched us hard, but he's marched at our head, and we pushed the infantry night and day. He wanted to relieve Stirling before St. John's Day: that's tomorrow. He cut it fine. About bloody time, my sword-arm's getting restless.

Father said the king is a neophyte in war - not like him, who fought at Falkirk and Caerlaverlock, who is blood-brothers with Clifford and Beaumont. Then again, father's been grousing about playing wetnurse to Gloucester, yet being granted mere joint command of the vanguard with the youth. At least his majesty has the sense to let the nobles command in his stead, if not his choice in those commanders.

My father and I are accompanying his majesty through the Torwood. Uncle Gilbert & his men-at-arms are discussing whether to attack now or rest for the night. I said "We should attack now, before the Gallovidians arrive," only for father to thunder "Shut your trap, boy!" I was unconcerned: I made my point, and rode ahead of the vanguard. An Englishman does not sulk.

I'm among the first out of the wood, when I saw a small band of horsemen. Scottish banners. They're withdrawing: I spurred my warhorse forward. Yes, time for the fight! But blast, a host of pikemen have burst from the woods. Frustrated, I momentarily drew rein, spitting terrible oaths. I must've been dozens of yards ahead of the vanguard. I started to turn back, when a glimmer of gold caught my eye.

He was a knight, that much was clear. He was clad cap-a-pie in maille, with a gold-trimmed bascinet. He bore a great axe in his hand, directing the pikemen with his other. I drew closer: perhaps I could challenge this knight. He turned his horse - a mere palfrey, grey, practically a pony - and I got a good look at his surcoat. Yellow, mostly, with a red charge. What is that beast? Two legs...

Or, a lion rampant within a double tressure flory Gules. By St. George, the gold on his helm is a crown!

Saints above! The King of Scots, one of the three greatest knights in all Christendom himself, but a bow-shot away. If I could capture him - slay him - O God on his heavenly throne, such triumph would bring glory eternal to the de Bohuns! He turned, spied me: I make my intentions clear with a profane oath and spur my mount onward, lance raised. I cared not for the cries of my squire, my uncle and father, commanding me to return to formation, but what matter pride and decorum when I could win the battle - a kingdom - with a single stroke? This would prove to my father my worth a hundredfold - and earn valour that would be the envy of the king himself!

The Bruce rose to the challenge, as I would expect of any fighting man, even if he was a Scotsman. And I heard the gutteral Scots tongue of his fellows, urging him to fall back - they knew as well as I that he rode to his doom. Doughty warrior he may be, but the advantage lay with me. I was clad in the finest continental maille, my lance would find his heart long before his axe could find my neck, and my destrier would break his puny palfrey's resolve and stall his momentum.

All this raced in my blood-ravening mind. Time slowed. Scotsman and Englishman held their breath, as the King of Scots and I tensed for the clap of thunder which would send one of us to Hell. I dipped my lance, he raised his axe. I couched, he braced. I aimed for the red Lion, soon to become redder still, he - swerved his horse, ducked under my lance - 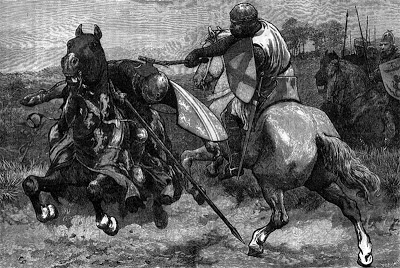 Blackness. Suddenly I see a knight falling from a horse. The surcoat, it bears my livery. All around me is silence - no, not silence, for I hear the roar of a host, but distorted, strange, as if I were underwater. I look back: my uncle and father look on, motionless. John-boy rushes forward, tears in his eyes. He turns over the dead knight. John-boy cries in anguish. The knight's helm was cloven in twain: the axe bit through to the very collarbone. The Scots surge forward. John-boy stands over the corpse, drawing his poniard, tears mingling with fury.  He is skewered by the spears of the wild Scots, his ruined body crushed under their heels.

I smile. Smiling in death is a curious thing. "No, lad. Such gallantry as you have shown would be the pride of any king."

On this day in 1314, Robert the Bruce met Henry de Bohun on the field of Bannockburn. It didn't go well for him, but even though he was slain, he is forever immortalised in the annals of Scottish history as a symbol for the battle itself - the superior English force repulsed by the scrappy Scot.
Uttered by Taranaich at 23:09