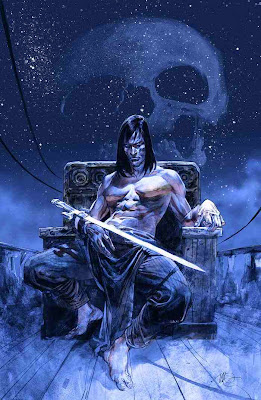 Iggy Pop dressed as Conan, looking about as depressed as I do looking at this cover to Conan the Barbarian #10.


Well, time for another update: times are interesting indeed, as it turns out I have more time for one project when I was under the impression I had a matter of days, while the other project is still in the womb of creation, waiting to be snatched out. How purposefully vague.

In the meantime, quite a few things have happened in the world of adventure.


Ben Friberg posted up the Glenn Lord tribute panel from Howard Days this year. Again, this could have been very maudlin or subdued, but I feel it was just the right temper:

Continuing the Glenn Lord thread, the Paul Herman has graced the Robert E. Howard forums to discuss some of the fascinating findings in the Lord collection (and Crom take me, I can't get his accent out of my head as I'm reading this):

I have been away a while, working on various things, mostly family, but also I've been helping out the Widow Lord (Lou Ann) with sorting out the Glenn Lord collection. For those that did not know, Glenn did not win Lotto (though some might think so!), and did not have infinite money to spend on his collection. And he had a family to care for. AND, a large portion of his collection was acquired in the 50s, 60s and 70s, back when the things he was acquiring cost just a dollar or two apiece, and they clearly didn't have any real value. So Glenn never really got into treating his collection like some kind of all-consuming sacred duty. It was just his stuff! Not to mention, it would have cost tens of thousands of dollars to do the museum treatment. Well, and acquiring an extra house to put it all in. Really.

Also, for a big collector, his organization wasn't perfect. Oh, he kept brilliant notes on everything, and his ability to recall from memory a billion little bits of data was always amazing. But if you asked him where a particular item in his collection was, out ot the more than 20K items, stored in 4 or 5 different places, something that he hadn't pulled out in a couple decades, that might of stumped him offhand. Oh, he'd find it eventually, as he generally would recall where to look. But this kind of fell back to that lack of desire to drop tens of thousands to create perfect storage. He DID manage to leave a nice nest egg for his family, and I can dig that, as a father and husband myself. Priorities.

So, me, and occasionally some others, especailly Rob, started digging through everything. I cannot tell you how humbling it is to be entrusted by the family with carefully digging thorugh all this, and trying to give them some basic lists of everything, some suggestions on what things are worth, options for disposal, if desired. Just bringing back to the pad in Dallas 20 or 30 or 40 boxes at a time, indexing it all, and seeing what you see.

I thought I'd start letting y'all in on some of the new or unusual things that have passed over the desk. I don't know that I've seen anything that really changed my worldview of REH or Glenn, nothing like that. But a LOT of interest tidbits.

So, let the stories begin.


Brian Leno has a report up regarding the Conan panel at Pulpfest.


But then came Saturday night and Conan panel time.  There was some liquid knowledge flowing at the bar beforehand which seems to be the customary thing to do.  Our presentation was scheduled to start at 8:30 but in typical PulpFest style we went on a bit late, around 8:50 or so.  It’s not because of bad planning; it’s actually due to the enthusiasm of the fans—every panel I saw had a pretty good turnout with people asking plenty of questions.

Our panel went, I feel, very well, with no casualties and while usually we would have been given our hour, that night we had to pretty much end on time—an auction was scheduled right after our talk and you never want to get in the way of a pulp fan with cash, so we made it a point to be done at 9:30.  A pretty nice-sized crowd did show up, perhaps seventy or so, and while some were there waiting for the auction all seemed interested in Howard and his tales of Conan.

I was really pleased to see some younger people in the audience—their love and enthusiasm for Howard was truly infectious and I don’t see interest in our favorite Texan dying out anytime soon.  One gentleman explained that he started reading REH after watching Conan the Barbarian—so even bad movies can do some good.


I notice Brian didn't qualify which Conan the Barbarian turned the youngsters onto Conan, but it would be nice if it was the more recent one. Brian also noted that Ed Chaczyk recorded the entire event, so it's at least preserved in digital format.

In other REH news, Rob Roehm continues to bolster his reputation as a Howardian researching machine with a discovery that is possibly extremely relevant to Howard's work viewed through a theosophical lense:

The Theosophy angle reminded me of Jeff Shanks’ recent article in The Dark Man (vol. 6): “Theosophy and the Thurian Age: Robert E. Howard and the Works of William Scott-Elliot.” This is outside my area of expertise, but given the 1925 date on the letter above, one wonders if Kingsford’s The Perfect Way (1882), a collection of her mystical visions and dreams, made it onto Howard’s reading list. The book is mentioned on Kingsford’s page at the “Mysterious People” website: “At the time [1882] The Perfect Way, which explored the deeper Mysteries of religion, was extremely well-received and regarded as the most important modern book of esoteric wisdom and mysticism ever published.” Kingsford’s relationship with Theosophy is also discussed.


I can certainly vouch for the quality of "Theosophy and th Thurian Age," it's a fantastic piece of work, and I think essential reading for anyone looking for the inspirations of the Thurian - and by extention, Hyborian - Age. Speaking of theosophy, I'd been pondering the possible theosophic elements of the Tomb Raider series. There are obvious elements like Atlantis-as-advanced-society, but I've noticed a few other possible connections. The idea of the Atlanteans creating a "race" of genetic giants reminds me a tiny bit of aspects of the Root Race theory, particularly the Rmoahal; Tihocan and Qualopec have something of the air of Morya and Koot Hoomi; Natla's quest for ultimate knowledge and power is vaguely reminiscent of the trials of the Ascended Master; the presence of dinosaurs in some levels could be explained by the fact that the Lemurians coexisted with them; even the doppelganger has a loose analogue in the Dweller on the Threshold (how's that for Lovecraftian?)

Were I making a Tomb Raider reboot, I'd go down the Theosophical route: it'd make it distinct from Indiana Jones and other pulp adventure stories, and give it something of the grandeour of Howard, Burroughs and other authors who thought big. I doubt I'd write a whole article on it, but there's something to be said for trying to put more depth into Tomb Raider* than insulting attempts at "character development" and preferring to rip off currently popular game models of a similar genre...

In other news regarding female action heroes, it turns out a female version of The Expendables is not just a crazy pipe dream, but it could well happen! Not only that, but a female version of The Expendables with Sigourney Weaver, Linda Hamilton, Carrie Anne Moss, Gina Carano and Michelle Rodriguez (plus Cynthia Rothrock and Gina Carano)? I can see the future! Well, if this does end up happening (it's still just a rumour/theory/such), I really hope they get Pam Grier on board.

More film news: Michael Bassett's Solomon Kane gets a nice alternate picture reminiscent of Dark Horse's series (at least nice for those of us who want to be reminded of Death's Black Riders...): 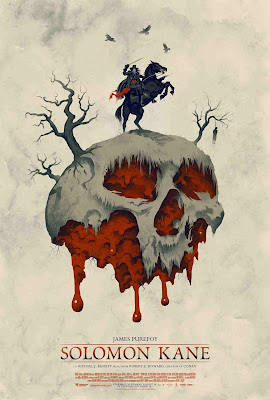 Finally, in a piece of self-aggrandizing, I often wondered: I know plenty of Howard and Conan fans are interested in a Hyborian Age encyclopaedia, but is there a broader appeal? Would the rest of the world be interested in such a thing? Well, this news has bolstered my hopes.

The Legend of Zelda: Hyrule Historia, a 248-page hardcover encyclopedia on the Legend of Zelda universe being published by Dark Horse, went up for pre-order at Amazon yesterday, quickly shooting up the site’s Top 100 Best Sellers in books list where it currently sits at #1.


True, the Zelda franchise is one of the biggest of Nintendo's properties, and true, the games are perennial bestsellers. But at the same time, this went to the top of the Amazon charts! The top! If an encyclopedia of Hyrule can top the Amazon bestseller charts, then I cant help but think a Conan encyclopedia wouldn't do too horribly. Obviously nowhere near the same league as Zelda, let alone the top of the Amazon charts, but it shows that there's an interest in even "non-fiction" books based on fictional worlds.

*Other than the obvious. I'm a firm supporter of the idea Lara should be buxom and curvaceous - Serena Williams, Gina Carano and Tamira Paszek show you can be athletic as well as curvy - though frankly, I think she could do with a sports bra. Why on earth would she wear a flimsy camisole like in Tomb Raider 3? Better to have proper support at the expense of fanservice. Maybe one of those magic Ahh Bras. Or perhaps she has some sort of custom-made industrial-strength bra. In any case, retaining her measurements does not necessarily mean making her a sex symbol, and I think making her buxom, but not putting her in tight/revealing outfits all the time would be a pretty decent feminist statement. If nothing else, I just think her current physique is too bloody similar to Alyx, Jade, Faith and other great female protagonists, which is just a different kind of problem.
Uttered by Taranaich at 23:43