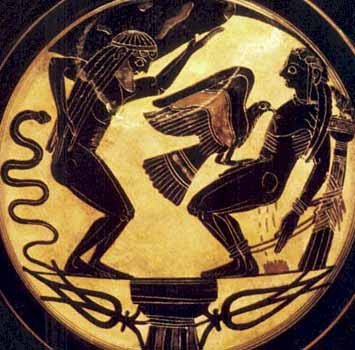 "The Frost-Giant's Daughter" may be only 9 pages long, but it's one of Howard's biggest stories, tying in an awful lot of themes and ideas from across multiple stories and mythic inspirations. It's one of the stories that I feel is really important to do justice to, which is why it's taken such a blasted long time to finish: I could've skipped ahead to "The God in the Bowl," but I really want to do everything in the order Howard wrote the stories, since that in itself takes up a big chunk of proceedings. Probably should've split it into multiple parts a while ago. So, in lieu of the next 80 Years of Conan, here's a round-up of links I found of interest.


In a happy coincidence, some of the things I'll be talking about were alluded to in Prometheus, as this blog post surmises:

“The Proto-Indo-European *yem- ‘twin’ underlies the name of a god common to the Indo-Iranians (Indic Yama, Avestan Yima) who becomes the progenitor of mankind. [T]he underlying form for the name of Remus, the brother of Romulus in the story of the founding of Rome, was actually *iemus, the early Italic form of Proto-Indo-European *yemos ‘twin.’ In Norse mythology, mankind is formed from the remains of a giant whose name, Ymir, has also been derived by some from the Proto-Indo-European word for twin. Furthermore, Tacitus relates how the early Germans were the descendants of Mannus and Tuisto, the latter of which again means twin. Among the Celts we have the tale relating the foundation of Emhain Macha, the ancient capital of Ulster, which was explained by recourse to a myth in which Macha gave birth to emuin ‘twins,’ again derived from Proto-Indo-European *yem-.” Mallory, supra.


There are also a few other links I wanted to note that aren't pertinent to "The Frost-Giant's Daughter," but will be relevant for future stories, as well as one or two I just wanted to share because they're quite cool.

Wood's Conan the Barbarian continues on its course, and reading some of the more positive reviews just makes me realise how "far gone" I am in Howardness that I just shake my head in disbelief. Even fellow Howard fans like Zach Davisson love it a lot more than I do:


Conan the Barbarian #6 comes pretty damn close to being perfect. There are certain scenes, certain panels, certain bits of dialog that give you everything you could want from a Conan comic. There are times when Wood just nails Conan, getting right to the core of the character, and times when Harren and Stewart combine to give us the Hyborian Age in all its gritty wonder. But then they are followed up by another panel that just doesn't quite click, or some art that goes too far one direction or the other, and the momentum of enjoyment fades.
Fortunately, the good bits outweigh the not-so-good bits. Issue #6 may not be perfect, but it is a hell of a good comic.

But this review seems the biggest disconnect:

The announcement that Brian Wood was going to adapt “Queen of the Black Coast,” the classic Conan novella from Robert E. Howard, caused some serious heartburn for a lot of purists.  When Dark Horse further revealed that Wood didn’t intend to adhere precisely to Howard’s story, but instead was going to flesh out the relatively slim tale with his own invention and extrapolation,  some in the peanut gallery hit the panic button.

They really shouldn’t have.

It’s been obvious from the beginning that Wood scoured the original novella for every shred of description and backstory he could find. His scripts don’t contradict the source material.  Instead, he expands upon it faithfully to add new dimension to Howard’s work.

... I see nothing blasphemous in exploring some of the nooks and back alleys left untouched by Robert E. Howard in the original “Queen of the Black Coast.” On the contrary, I think it’s a pretty intriguing concept.


I'm going to have to agree to disagree that Wood's scripts "don't contradict the source material" considering that the very second page of the very first issue pretty explicitly does exactly that. Most importantly, the idea that Howard purists were panicking about Wood fleshing out the story is absolutely incorrect, considering most of us were perfectly aware and hotly anticipating just how Wood was going to extrapolate the parts in-between the first chapter and the rest of the story. If anything, the biggest issue has been Cloonan's art, not Wood himself, and if anyone's been hitting the panic button, it certainly wasn't in the terms Love states.

Have you ever wondered just how many times Conan, Tarzan, Sherlock Holmes and other characters have been adapted? Well, denebthall has:

I did a spot of research on the film, and in the course of said research I came across a rather fascinating little tidbit on IMDb.

Said tidbit was to be found in the Trivia section of their entry on the movie. I don’t know who posted it, but it claimed that Tarzan “is second only to Dracula in the adaptation chart”.

Well, I thought to myself, that is an intriguing bit of information, assuming it’s true. Second only to Dracula in terms of adaptations, eh? I wonder who the runners-up are, then? There must be a list somewhere.

I set out to find it. A half-hour later, I was a seething mass of frustration.

There were no lists of such things. None. Wikipedia didn’t have one. Nobody had one. Oh sure, there were plenty of lists of people’s favorite such characters, but most-adapted? Neh-eh. Not a one.

Now if there’s one thing you can say about me, it’s that I don’t give up easily when I’m on the scent. No such list existed, eh? Then I’d make one! Yoiks! Tally-ho!


Astoundingly, Conan comes in fifth place with 127 adaptations! Now, I'm no expert on the grander Conan franchise like the films, cartoon, series and most pastiches, but I have to question how he came to those numbers. He kindly responded:

I looked the characters up on Wikipedia, went over the lists of their appearances and so forth, made on-the-spot decisions as to whether or not such-and-such counted, and wrote down the number that resulted. In the case of Conan, since most of his stuff is in book form, I basically counted all the post-Howard books as adaptations (discounting reprints, ones he co-wrote with other authors, etc.). It was a little more complicated than that, but not much.


I guess I'd have to disagree on the matter of post-Howard books counting as adaptations (this is probably why Sherlock Holmes is so wildly far ahead of all the others on the list), but some other Conan fan would be better for the job than myself.

There's a fantastic post by Howard Andrew Jones on Howard's style and how he thinks REH is very under-appreciated as a prose stylist. In particular, he discusses an aspect of Conan which will take up the bulk of at least one part of the "Tower of the Elephant" section of 80 Years of Conan:

But let’s turn our attention back to Howard’s most famous creation, Conan, because I mean to show you that he’s more than is  assumed from the usual portrayals.

First, he’s not unstoppable and unchangeable, nor did he stride forward into his first adventures with the same skilled confidence he evidences in stories set later. He is powerful and courageous in “The Tower of the Elephant,” but he is new to cities...

In the sword-and-sorcery clonans that followed the Cimmerian’s footsteps, there was little variety and less depth. But Conan does not stride forward, unthinking, and hack everything before him. Here he comes upon a chamber where he hoped to find the treasure, and finds instead a frightening, humanoid monster. On the off chance you’ve never read this story — because you should, and I don’t want to spoil it for you — I’m cutting most of its description, and just showing you Conan as he realizes humans have blinded and imprisoned this being.


Roderick T. Long mentions his appreciation for Howard's style of prose in "By This Axe, I Rule!":

But although some of Howard’s punctuational choices admittedly seem a bit random, I don’t think there was anything random in his deployment of fast and slow transitions. (In this story, at least. I haven’t looked through Howard’s other stories with an eye to fast and slow transitions; sufficit diei.) His general preference for fast transitions fits the fast pace of the story; it’s like a cinematic tracking shot. But when he switches to a slow transition there’s a good reason for it. A good example is when Kull tells Seno val Dor: “I am sorry. But I cannot help you.” The editor changes this to “I am sorry, but I cannot help you,” but rushing through the apology like this makes Kull seem dismissive; Howard’s version, pausing on the “I am sorry,” gives it the weight of sincerity. (I would go back and find more of the examples I noticed, but I am too lazy.)
One reason I think Howard’s preference for fast and slow transitions over medium-speed ones was intentional is that he symbolically incorporates it into his description of Kull:


There was nothing deliberate or measured about his motions – either he was perfectly at rest – still as a bronze statue, or else he was in motion, with that catlike quickness which blurred the sight that tried to follow his movements.


Ascalante leaped as a wolf leaps – halted almost in mid-air with the unbelievable speed which characterized him ….

(In that last one it’s almost as though Howard is foreseeing bullet time.)


And Ken Preston gives REH props in his selection of five books he'd like to be buried with:

The first book, well, all right, series of books, that springs to mind are the Conan novels, by Robert E Howard. After all, if civilization has collapsed, everybody’s going to be on a steep learning curve in the art of simply surviving, and so a few lessons on sword fighting and axe wielding, distressed damsel rescuing and wizard battering will come in handy. Besides, if you are a fan of fantasy novels and you’ve never read any Conan books, what are you waiting for? You should check them out right now. Because I can only take one it would be The Coming of Conan the Cimmerian.


Neat. I'd go with the Centenary Edition myself (it has all the stories, after all) if I was going to pick Conan, though frankly I'd probably go with one of the two Best Of collections.
Uttered by Taranaich at 20:51