80 Years of Conan at Pulpfest 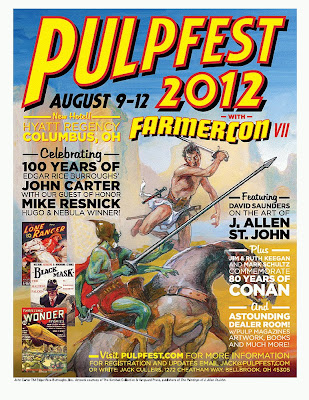 Coming up next month is Pulpfest, the annual shindig dedicated to all things pulp: a celebration of Tarzan's and John Carter's centennials, former Cimmerian blogger Bill Maynard and Howard art extraordinaires the Keegans and Mark Schultz will be in attendance, and dozens of events and panels will take place.  As with Howard Days, Conan's 80th is high on the agenda, with a panel on the Cimmerian on Saturday the 11th:

On Saturday, August 11th, PulpFest will celebrate the eightieth birthday of Conan and the sword and sorcery genre with a panel presentation hosted by Rusty Burke, the editor of the highly acclaimed Howard reprint series published by Del Rey Books, the president of the Robert E. Howard Foundation, and a member of REHupa (The Robert E. Howard United Press Association).

Joining Rusty for Robert E. Howard’s Conan and the Birth of Sword and Sorcery will be Don Herron, editor of The Dark Barbarian (Greenwood Press, 1984), the first book to treat Howard’s work seriously, and its sequel The Barbaric Triumph (Wildside Press, 2004). For a quarter century, Don has been leading San Francisco’s Dashiell Hammett Tour, the longest-running literary tour in the United States. Also on board will be Brian Leno, an award-winning Howard scholar whose essays have appeared in The Cimmerian, REH: Two-Gun Raconteur, and Up and Down These Mean Streets, and John D. Squires, an Ohio bookseller whose knowledge of fantastic fiction is broad and deep. John is an expert on the work of M. P. Shiel and publisher of JDS Books and The Vainglory Press.


Rusty Burke and Don Herron,* of course, need no further introduction. I'd mentioned Brian Leno's "Atali, The Lady of Frozen Death" in 80 Years of Conan, but that's barely scratching the surface of his decades of work. "Lovecraft's Southern Vacation," a look at "Pigeons from Hell" which previously appeared in The Cimmerian v3 n2, can be read online. Most recently he's been doing great work on Howard and his admiration of Arthur "Kid" Dula at the Two-Gun Raconteur blog (parts one, two, three, four, five and six).

Were I a rich man, I'd take my private dirigible over to Columbus, Ohio, set anchor above the Hyatte Regency, and parachute down to enjoy what will undoubtedly be a fantastic and informative panel. Then steal all the books, because who's going to tangle with a man who has his own airship? Nobody, that's who.

*The site mispelled him as "Heron" in the tags: I can sympathise, having been misidentified at various points as Harrow, Harn, Harren and indeed Herron, but them's the digs.
Uttered by Taranaich at 22:12