A couple of Mark Finn-related links I wanted to share.

First is something I find to be of tremendous importance: "Southwestern Discomfit," a response to Gary Romeo's "Southern Discomfort."  The interests of impartiality on the REHupa website have meant that the latter essay, despite a few considerable issues (which Mark discusses), is widely available to anyone who comes on the site. Unfortunately, the lack of any counterpoint to the essay means that some have taken this as the Party Line on REH and race, which is certainly not the case.

Bothered by this phenomenon in recent times, Mark decided to offer that counterpoint:

REHupa #173 was a watershed mailing, way back in February 2002, for a number of reasons. Significantly, it was the mailing that featured Gary Romeo's article, "Southern Discomfort." As I read the article, I immediately noticed that Gary, in constructing his argument, was so interested in trawling the bottom that he willfully overlooked so much better stuff closer to the surface.  It made me angry, and it made me instantly defensive.  What I wanted to do was first ask Gary: what was your point in writing the article? Who is the target audience for it? And then I wanted to take it apart, piece by piece in my next mailing.
But I didn't. I was new, and I didn't want to rock the boat, or make any enemies right away. So I held my tongue. Besides, I wondered, I had no idea what my fellow REHupans thought about any of this. Maybe they agreed with Gary.
As it turned out, they did not. In the subsequent mailings, several of the older and more experienced REHupa members took Gary to task, and took a number of calculated swings at his essay, his methodology, and even his intent. I felt a lot better about my involvement in REHupa, but I regretted never having a chance to tee off on the topic.
When the REHupa website started up, it was determined that more recent, more approachable articles could also be listed on the site, if any member so wanted. Gary was one of the few people who stepped up to the plate and actually handed out articles to post. Along with his other Pro-de Camp essays was "Southern Discomfort." I watched it go up, go live, and bit my tongue. After all, I thought, who was I to say that Gary could list all the rest of his articles, except that one? That's when I got the idea of first doing a counterpoint article, just to balance out Gary's essay, especially now that it was devoid of its context within the REHupa mailings and commentary structure. But at the time, I was working on what would become Blood & Thunder: The Life and Art of Robert E. Howard, and so, I thought, I had bigger fish to fry.
Now it's 2011. I've been a member in REHupa for nearly ten years now. And it's high time I took a whacking stick to "Southern Discomfort" publically. It has needed it for a long time, particularly since it's one of the most popular things accessed on the REHupa website. The number of links to it from external blogs, websites, and citations used to indicate that yes, Robert E. Howard was indeed a racist, because look, right here, this guy says so on the experts' website, are too numerous to count. That's the problem with Internet research: it's grab and go, and no effort is made to fact-check it.
Well, you may consider this the official fact-check. This article assumes that someone has already read "Southern Discomfort" and want to know more about whether or not Robert E. Howard was a racist or not.

I don't doubt that the issue of Howard and race is something that will be a subject of discussion for as long as Howard himself is, but the more approaches we have to the argument, the more fulfilling and satisfying those discussions may be.

The second piece of news is on the new edition of Mark's outstanding Blood & Thunder: The Life And Art of Robert E. Howard. He made a tantalizing mention that an announcement will be made on Monday, but to tide us over, he revealed the cover for B&T 2.0, courtesy of the indefatigably talented Keegan duo: 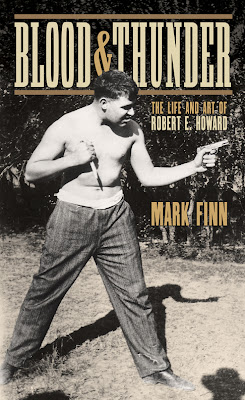 I liked the cover for B&T 1.0, but I like this a lot better. Why? Because it has Robert E. Howard on it! That's always good. Plus, while the previous cover had the requisite sanguinary & brontological elements, Conan hacking lumps out of a giant snake isn't representative of Howard's vast library - something Mark himself keenly notes frequently - so rather than pick one aspect of Howard's work, why not pick a quintessential image of Howard which tells you everything you need to know about the man in a single shot?  Better than the studio photo, certainly.
Uttered by Taranaich at 00:01