10. Stygimoloch, the Horned Devil from the River of Death

Stygimoloch is one of those dinosaurs that you'd think was made up for a '50s creature feature: spikes and horns sprouting all over its head, just about the right size to threaten a man without being too dominant, a name that wouldn't look out of place in the band line-up for Wacken. Long before Dracorex came along to put palaeontological taxonomy into further disrepute, this guy was the closest thing we got to a proper D&D style dragon.

It's hard not to like Ankylosaurus: he's the archetypal armoured dinosaur. He isn't as spikey as Gastonia, or as well-described as Euplocephalus, but the idea of this curmodgeonly, grouchy old beast being so tough that it could see off even the mighty Tyrannosaurus is strangely appealing to me. Perhaps it's because he's the most tortoise-like of the dinosaurs: tortoises are my favourite modern animals.

If we imagine Stegosaurus as the Lone Gunslinger of the dinosaur world (and really, why the hell shouldn't we), then Tuojiangosaurus is the Ronin. Not as flashy, big or famous, but what it lacks in size and popularity, it makes up for in efficiency and ruthlessness. Stegosaurus's plates look somewhat like big leaves: Tuojiangosaurus has knives. Huge, wide-bladed knives, like Chinese leaf swords. 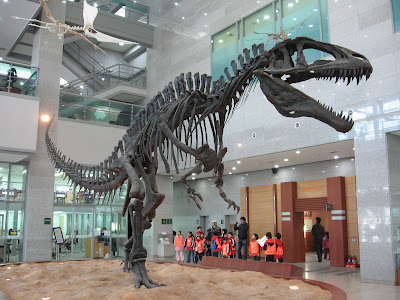 The only theropod to make the list. Theropods are cool and dangerous, but for some reason I prefer herbivorous dinosaurs to the predators. Nonetheless, I like Acrocanthosaurus the best of them, mostly because its spinal ridge is quite a distinctive and interesting feature.

I like ceratopians quite a bit: not as much as my beloved sauropods, but quite a bit. Although most dinosaurs are big, spectacular monsters, there are a few smaller creatures not much bigger than modern animals. Of these, I like Montanoceratops. It's about the right size for someone to ride, and still fit on a ranch or farm.

Therizinosaurus is scary. It's almost like some nightmarish Frankenstein's Dinosaur:a quilt of feathers, the arms of Deinocheirus, the long neck of a sauropod, the head of an ornithopod, the heavy legs of a theropod, and a massive body like a pot-bellied gorilla rivaling a Tyrannosaurus in size. And to top it off, metre-long claws that could disembowel a foe with a swipe. Freddy Krueger meets Butterbean. What sane path of evolution could lead to such a beast?

When most people think of Ceratopsians, they usually think of the iconic Triceratops. Either that, or this guy. Styracosaurus is specifically named after the styrax, the pointed spike at the opposite end of the spear-shaft used by the Greeks. My wild imagination is now fired, where the Greeks rode these monsters in a phalanx against the Persian Indosuchus riders...

3. Amphicoelias, Hollow on Both Sides

The first sauropod on my top ten is also the largest dinosaur yet discovered, by quite a wide margin. For a long time, it was believed that the now-lost fossil was too fragmentary to be considered, and Cope's description insufficient. In recent years, however, palaeontologists are more willing, and is even included on Wikipedia.

Unfortunately, Amphicoelias is a victim of the fickleness of dinosaur taxonomy. Some dinosaurs have awesome names that are poetic and evocative: Tyrannosaurus, Stygimoloch, Velociraptor. Some have names that are dry and descriptive, but still memorable and iconic (Diplodocus being a favourite example). But Amphicoelias? That's the sort of name you'd give an obscure basal tetrapod or transitional anapsid.

The biggest dinosaur that ever lived is deserving of a big freaking name. Most of the cool ones are taken: Titanosaurus, Supersaurus, Giganotosaurus, Seismosaurus, Sauroposeidon, Bruyathkayosaurus, Ultrasaurus. I'd call it something like Basilotitan or Brontorex, something that sounds gigantic and mighty. Heck, why not go for the ultimate tautology Megalogigantotitan?

I love this little guy. Well, obviously little being an extremely relative term, but by sauropod standards, Vulcanodon is a tyke. It's a manageable size, one could ride into town on its back. It's also rather endearing, being essentially a babby sauropod.

Ah, old Diplodocus. He is without question the dinosaur I hold closest to my heart. It has the grandeur of the dinosaur, but is also an essentially peaceful, amiable creature, spending most of its day hoovering up vegetation and just strolling about the world. "Time of the Titans" is my favourite episode of Walking with Dinosaurs, though Big Al is a close favourite. Those little Diplodocus hatchlings were just adorable.
Uttered by Taranaich at 19:50