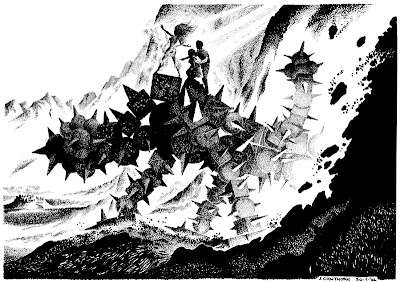 And, of course, some online sources for his now public domain stories:

I had spoken before about how Merritt had a way of words that just enraptures me, in the way Clark Ashton Smith did: his command of language may be deemed purple or overwrought by some, but I feel their sincerity and enthusiasm more than justify their vigour. "The Ship of Ishtar" is imbued with the grandeur and majesty of Mesopotamian myth, "The Moon Pool" permeated with the mystique of lost worlds and civilisations, and "The Metal Monster" practically anticipates the lyrical content of Heavy Metal as a genre. Every chapter title in this book could make for a shredding metal track (well, after the first, though it could if you squint):

Valley of the Blue Poppies
The Sigil on the Rocks
Ruth Ventnor
Metal With A Brain
The Smiting Thing
Norhala of the Lightnings
The Shapes in the Mist
The Drums of Thunder
The Portal of Flame
"Witch! Give Back My Sister"
The Metal Emperor
"I Will Give You Peace"
"Voice from the Void"
"Free! But A Monster!"
The House of Norhala
Conscious Metal!
Yuruk
Into the Pit
The City That Was Alive
Vampires of the Sun
Phantasmagoria Metallique
The Ensorcelled Chamber
The Treachery of Yuruk
Ruszark
Cherkis
The Vengeance of Norhala
"The Drums of Destiny"
The Frenzy of Ruth
The Passing of Norhala
Burned Out
Slag!


METAL WITH A BRAIN. THE SMITING THING. "WITCH! GIVE BACK MY SISTER." THE METAL EMPEROR. "FREE! BUT A MONSTER!" CONSCIOUS METAL! PHANTASMAGORIA METALLIQUE. SLAG!  For goodness' sake, someone get Iron Saviour on the phone.

And that's just chapter titles! Metal permeates this text: Metal Things, the Metal Emperor, People of Metal, Domain of the Metal Monster, the Metal Hordes, uncountable gorgeous metal metaphors (metalphors?) - you have lines of dialogue like this:

"Metal," I said - it was the only word to which my whirling mind could cling - "metal -"
"Metal!" he echoed. "These things metal? Metal - ALIVE AND THINKING!"

"The Keeper of the Cones and the Metal Emperor!"

They were metal things with - MINDS!
That - that was the incredible, the terrifying thing. That - and their power.
Thor compressed within Hop-o'-my-thumb - and thinking. The lightnings incarnate in metal minacules - and thinking.
The inert, the immobile, given volition, movement, cognoscence - thinking.
Metal with a brain!


Come on, I can't be the only one imagining that as song lyrics being screamed by Rob Halford. METAL WITH A BRAAAAAIN!

Score upon score of them there were - huge and enigmatic. Their flaming levins threaded the shimmering veils, patterned them, as though they were the flying robes of the very spirit of fire.
And the tumult was as ten thousand Thors, smiting with hammers against the enemies of Odin. As a forge upon whose shouting anvils was being shaped a new world.
A new world? A metal world!

There is literally nothing I could say that would make this more metal. If you asked a metal fan if this was an excerpt from a novel written in 1920, or lyrics from a Manowar or Piledriver track, what do you think they'd say?

The story is full of this kind of thing:

The little points of living light that were the eyes of the Metal People!

Built of the animate bodies of countless millions! Tons upon countless tons of them shaping a gigantic pile of which every atom was sentient, mobile - intelligent!
A Metal Monster!
Now I knew why it was that its frowning facade had seemed to watch us Argus-eyed as the Things had tossed us toward it. It HAD watched us!
That flood of watchfulness pulsing about us had been actual concentration of regard of untold billions of tiny eyes of the living block which formed the City's cliff.
A City that Saw! A City that was Alive!

And now I saw - realizing with a clutch of indescribable awe, with a sense of inexplicable profanation the secret of this ensorcelled chamber.
Within every pulsing rose of irised fire that was the heart of a disk, from every rubrous, clipped rose of a cross, and from every rayed purple petaling of a star there nestled a tiny disk, a tiny cross, a tiny star, luminous and symboled even as those that cradled them.
The Metal Babes building like crystals from hearts of radiance beneath the play of jocund orbs!
Incredible blossomings of crystal and of metal whose lullabies and cradle songs were singing symphonies of flame.
It was the birth chamber of the City!
The womb of the Metal Monster!

And was this punishment - a sentence meted out for profaning with our eyes a forbidden place; a penalty for touching with our gaze the ark of the Metal Tribes - their holy of holies - the budding place of the Metal Babes?

Again, this was published in 1920, and you wouldn't even need to change the words much to work them into a metal song.

So I'm fairly confident in saying that "The Metal Monster" not only predicated many of the more intellectual themes of Transformers, but is also the most metal novella ever written, literally and figuratively. And for a book published in 1920, that's pretty impressive.
Uttered by Taranaich at 20:01