If you like flashes of brilliance hidden amidst filth and smut, we recommend Oglaf.com 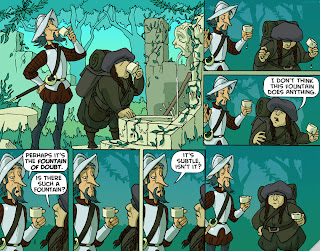 WARNING: DO NOT CLICK ANY OF THE LINKS IN THIS PAGE UNLESS YOU HAVE NO ISSUES WITH NUDITY, SEX, GORE, PROFANITY, FILTH, OR ACERBIC WIT. I'M BEING VERY SERIOUS. THIS MEANS YOU, GRAN.*

Oglaf.com is a webcomic which features some genuinely brilliant humour, but it's definitely not for the faint of heart. Full of frank depictions of nudity, sexual acts, gore, profanity and mild peril, it's still a webcomic I brave every so often.  Sometimes you get something truly inspired, like the tale of Kronar's son, which takes the idea of a gay Conan (the very idea of which was a reason for De Camp's strict control over pastiches) and runs with it, even though Kronar still ends up being pretty masculine in the process. No doubt the silly people who accuse Conan and Howard of homoeroticism will feel vindicated, but I find it fun to just think their misplaced jibes are projecting things that aren't there. But, as was the case with Your Highness, I guess I'm just too much of a prude to have much stomach for this sort of thing on a regular basis.  Ah well.

A recent(ish) comic, "The Weird Woman," features a pastiche on Howard's "Worms of the Earth," making it one of the most perceptive examples of Howard humour out there, considering most attempts at it tend to be repetitive jabs at the 1982 film or the fact Conan shares his name with a popular talk show host.  And best/worst of all, we get an endorsement/backhanded compliment if you move the mouse over the image: "If you like high fantasy or xenophobic jerks, we recommend "Worms of the Earth" by Robert E. Howard."

It's difficult to tell whether they're referring to Bran Man Morn as the xenophobic jerk - frankly, I think he's well within his rights to have a problem with the Romans who are invading his lands, torturing his people and threatening to conquer his home - or Howard, but either irk me.  Something tells me it's not meant to be taken too seriously, but given how long Howard fans have been railing against the popular conception of Howard, it smarts even in jest.  The sad thing is, it does seem like the sort of thing a DeCampista would write.  Still, I get the distinct impression that the folk of Oglaf.com are entirely irreverent, and no-one is sacred to them, so I shouldn't expect any special treatment in regards to Howard. Or perhaps I'm misreading the thing.  Who knows.

*You can, however, look at some of the safe for work comics which show off the sort of delightful humour I love about the comic: Magic Fish, Fountain of Death, Skulls!, Wolf!, King-Shaped, Princess, A Very Deep Chasm, Northerner, Human Women, Labyrinth, Sharks vs Jets, Changeling, Frog 3, Blanket, Use Item, The Huntsman, Scheherazade, Weeping Woods, Kindly Hunter, Gorek the Magnanimous, and the above Fountain of Doubt. For those who don't mind a bit of nudity, there's Ulric the Just, which might be my favourite on the whole site. JUST DON'T CLICK NEXT/PREVIOUS/HOME if you know what's good for ya!
Uttered by Taranaich at 00:36