A Scottish Barbarian in London 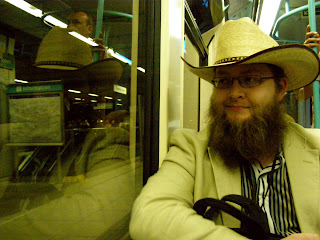 I saw Conan. I hated it. But not everyone hated it. Maybe it's just me. Maybe I should see it again, this time in 2D without the glasses-over-glasses ruining it for me: perhaps I'll have a different reaction upon a second viewing.

With that out of the way, let me tell you a tale, of a Scottish barbarian and his long-suffering assistant travelling south to the other side of the island. Danger, mystery, excitement, and more abound in this journey, with days feeling like weeks, minutes like hours. Truly, a quest to be sung by the great bards and skalds for all time.

Or maybe not.  I guess I'll just write it on the blog.

Day the First
I still hate flying. Because of certain rambunctious events taking place down in Sassenach country, we had to check in two hours before flight, which necessitated getting to the airport an hour beforehand. So, we had to start on our journey at 5:00, for a flight that wouldn't take off until 8:25. All because of some yobs in English cities deciding to exercise their implicit constitutional right to steal trainers and laptops from small businesses when they have an undefined grievance with undetermined sources.

Anyway, the flight itself was quite pleasant, ahead of schedule and speedy.  London was nice, though I was overwhelmed by the sheer size of the place, and concerned about getting lost in such a vast metropolis.  Luckily my assistant was an absolute star through this, and we only got lost once - though at least she knew she was lost fairly early on. If I was on my own I'd probably be somewhere in Ealing. Before we went to the O2, we checked in at the hotel, a fairly modest but cosy affair with an incongruously space-age bathroom: it seemed to function as a practically air-and-water-tight pod installed into the room. It was a bit like a spaceship landing in a room at the Travelodge.  Nonetheless, this made it very clean and efficient, and I ended up wanting an en-suite pod installed in my house - though the logistics of such an endeavour may prove to be insurmountable, alas. 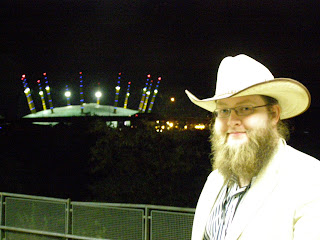 The O2 was a fantastic venue, very spacious and futuristic.  I liked to imagine it was some sort of miniature arcology prototype for the future, like in The Sleeper Awakes or The Forever War.  It was outside the O2 that I encountered someone I wasn't expecting - only Steve Dilks, that haranguer of the Conan Movie Blog!  Far from the subterranean troll I cheekily imagined him to be, Steve was a lovely chap, very gracious and enthusiastic.  It turned out he, too, was here for the premier, though his proximity to the O2 facilitated things for him.  After a quick talk, we decided to head in. A fuller discussion of the press side of things will be on Conan Movie Blog.

Anyway, after the premiere, Steve came and found me to get my thoughts on the film. It was critical to have someone who knew Howard to talk to after the film: my assistant isn't particularly affiliated with Howard's work, and though I could (and did) discuss the cinematic and narrative elements, I couldn't talk about its fidelity to REH. It's a stroke of luck Steve was there, as we had a fantastic talk about the film. Many of the things which ended up in my review and critique rose from that initial conversation over orange juice and coke. Famished after the assault upon our senses from Nispel's auteuristic voyage, we decided to continue our discussion over dinner at a Japanese restaurant. 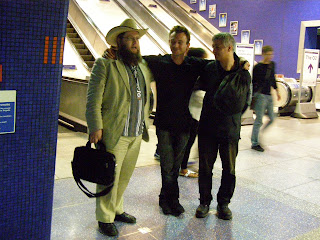 Steve in centre, and... dadgummit, I knew if I left it too long I would forget his pal's name! Steve, halp!
My previous experience with Japanese cuisine was sushi, when my good friend Christopholous invited me to try it out. He's turning Japanese, you see, so it's natural he would want to convert more. Regrettably, sushi wasn't for me, so I was a morsel anxious. However, cooked dishes were on the menu at this restaurant, so I relaxed... until I realised I still didn't know what half of which the dishes consisted. When the (sadly, blonde and blue-eyed non-Japanese) waitress came for orders, I started to get a bit flustered, but she was clearly highly trained for such volatile situations, and recommended a fairly unchallenging meal of curry and rice. Relieved of the responsibility, I settled down. It was indeed delicious. Thank you, blonde and blue-eyed non-Japanese waitress.

After our meal, we said our goodbyes to Steve and his pal, and made for the tube. I contemplated writing up my review there and then, but I was so utterly exhausted that I all but collapsed into my bed.  As I descended the Seven Hundred Steps of Deeper Slumber, I decided that the review must wait until I'm back on Scottish soil.


Day the Second
The next day was a similar whirlwind of adventure to yesterday, or at least what passes for whirlwind adventure to this bearded old tortoise. The first order of business was packing and checking out, and engaging on a hunting mission for sustenance. My intrepid guide chased up some breakfast, and we ate in the outer plaza of a McDonald's restaurant which was more evocative of an art deco coliseum than a fast food joint: all white columns and rings. Surrounded on all sides by roads and motorways, it was an odd little slice of classicism in a highly developed environment.  I hope Private Eye's Pseud's Column folk aren't reading this! 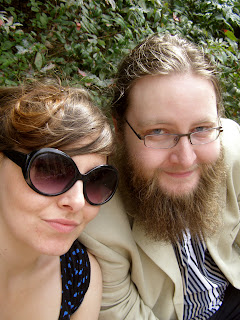 That beardy idiot and his fantastic assistant/sister
So began our first expedition, to the Tate Modern gallery. I still felt drained as Talos' ankle from the night before, so I spent much of the visit reclining in a comfy leather chair while my assistant assessed the works on display for her audacious heist to enrich her cultural knowledge. Nevertheless, I wanted to experience what the Tate had to offer, and I joined her after a while to view the stark photography of the victims of dictatorships and chest-thumping yawps of strident feminist artists. 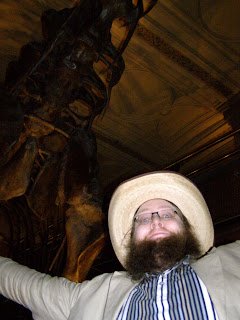 Whoo, here's me with a Camarasaurus! Camarasauruses aren't my favourite sauropods, that'll always be the Diplodocids, but they're still really cool. They're more like the classic idea of sauropods with their boxy heads and heavy builds. Jurassic Park: Operation Genesis has a Camarasaurus and a Brachiosaurus, but not a Diplodocus, or any of his family. What gives, guys? Even The Lost World: Jurassic Park had a Mamenchisaurus. Oh well, Walking with Dinosaurs made up for it with a whole episode about them. 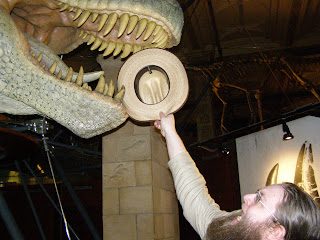 Oh noes, this hungry Tyrannosaurus is trying to make off with my sweet hat! Give it back, you toothsome rascal!

Hey, I am only 8, I think I'm entitled to a bit of foolishness at my age. 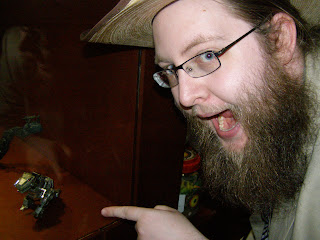 People say Transformers has nothing worthy to contribute to culture beyond serving as a damning indictment of an increasingly consumerist and militaristic childhood. And yet, here's Grimlock, on display at the Natural History Museum of London. Riddle me this: if Transformers has nothing to offer, why is there a Transformer in one of the most celebrated institutions of historical heritage in the world? "Me Grimlock have no time for cynical naysayers: me Grimlock busy being important cultural icon!" 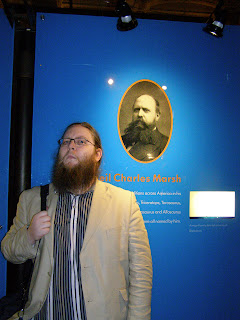 This picture should indeed offer proof that my beard is probably better suited to another century, as I think I'd be in good company with Joseph Leidy, B.F. Mudge, or Othniel Charles Marsh, much as I like to speculate Bob Bakker and Jack Horner also pay tribute. Not that I care a whit, I just like to explain my beard as paying tribute to the greats of palaeontology. Or at least their beards. Of course, that doesn't explain the hair, which I shrug off by saying I'm a metalhead/if I cut off my hair I'll lose my strength/I only cut my hair after I've been defeated in battle/I'm actually a Sikh.


We also learned there were a number of exhibitions on, as well as finding out the locations of various standing displays that didn't directly involve dinosaurs: deep sea creatures, a life-sized model of a blue whale, the mammal room, the tortoise case, animals of Africa, and Sexual Nature, an exhibition studying the reproduction of humans and animals with many visual displays. You can clearly guess which one I was most interested in. 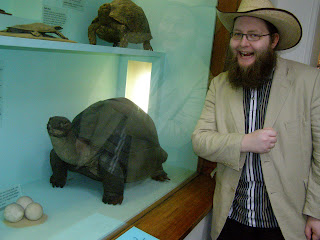 Hooray for tortoises!
Melville's still off on his top secret mission, so sadly he wasn't here for this trip. Still, we saw a few displays of his barbaric ancestors. 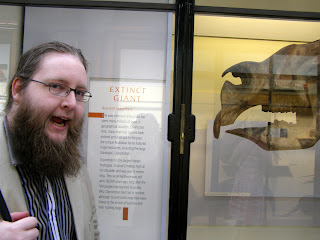 And here we can see an extinct giant, one of the great creatures which roamed the earth in times past. Also a Diprotodon skeleton. Ah, comical juxtaposition! I just learned that word yesterday, I might start using it more often.

And on that note, I think 8-year-old Aly needs a lie down.

After our adventures in art and palaeontology, the assistant and I went for tapas. Again, I've never had tapas, but we found a lovely little restaurant: Mar I Terra, which I'd definitely recommend.  Truly, my culinary experiences have increased tenfold since arriving in London! Alas, soon it was time to leave, and my trusty guide once again managed to get me to the Airport without getting stuck in one of the riots.

So, quite an adventure we had. I bought a Paddington Bear for my niece, complete with suitcase.
Uttered by Taranaich at 19:02