I think an introduction is in order: my full name is Alexander James Harron. Though a relative newcomer in the vast field of Howard studies at 25 years of age, few authors have galvanized my imagination quite as much as the Man from Cross Plains.

As a young boy, I devoured adventure fiction: Burroughs, Haggard, Conan Doyle, Stevenson, Dumas, Verne and Wells were my inspiration, the lost worlds and grand struggles of history my tonic. I also read Almuric during this time, then unaware that the author of one of my favourite books wrote anything else. Soon I would discover Tolkien, Moorcock and Le Guin, but finding other such fantasy fiction lacking I almost gave up on the genre entirely, until I picked up a copy of Gollancz’ Fantasy Masterworks collection of the original Howard Conan tales. Through Conan I discovered the vast field of Howard’s writings, and it is by way of REH that I found the other great writers of the Weird Tales era: Smith, Merritt, Moore, Brackett and others.

So what can this upstart from Scotland offer to the study of a dust bowl period Texan author? Well, my exposure to Howard has been relatively bereft of pastiche material: I neither watched the films, nor read the Lancers and comics until after I had the fortune to read the Del Reys. Arguably my first experience of Conan was the recent animated series Conan the Adventurer, though considering Robert E. Howard did not receive so much as a credit (nor did he deserve the shame) I would confidently call The Conan Chronicles my first “true” Conan experience. Whether this shaping results in new insights or just the reanimation of dead horses to flog anew remains to be seen. So let’s jump right in.


Considering the enormous output Robert E. Howard created in his career, it is inevitable that some stories were abandoned, rewritten or otherwise unfinished. Some are fragments ending abruptly, others with a rough outline, and others still remaining only as synopses. When synopses and drafts for published stories are discounted, there are dozens of such documents remaining. Using the clinical “untitled draft/fragment/synopsis” is technically correct, but not descriptive of the content therein. In the case of posthumous collaborations, sometimes a name supplied by the “co-writer” is used, but that is unsatisfying for a number of reasons.

Inspired by archaeological precedent of naming artifacts after a defining characteristic such as place, discoverer or distinctive element, I have designated new titles for nameless tales that are more easily recognizable and more representative of the original text. I originally started this project as a system to name the unnamed Conan stories, so they shall form the first part. 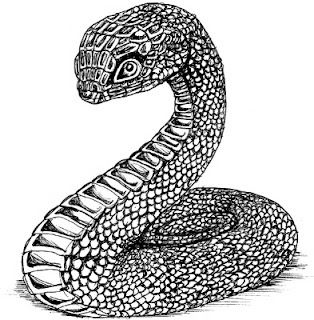 “The Nestor Synopsis”
Untitled Synopsis “A squad of Zamorian soldiers, led…”
The synopsis which lay the foundation for L. Sprague de Camp’s “The Hall of the Dead” could have made an exciting tale, but for whatever reason Howard left it as a mere outline. “The Halls of the Dead” is a perfectly succinct title since a hall guarded by dead warriors feature in the piece, though the name itself is a tad prosaic. The most identifiable aspect of the tale is the character of Nestor, the Gunderman mercenary playing the antagonist and eventual sidekick in the story: as such, “The Nestor Fragment” seems the most appropriate title.

“The Shumballah Fragments”
Untitled Draft: “Amboola awakened slowly…”
Untitled Synopsis “The setting: The city of Shumballa…”
Probably the most garishly pulpy synonym for this fragment was “The Snout in the Dark,” a rather unfortunate title that conjures images of an inquisitive piglet snuffling for truffles at dusk rather than the horrific boar-headed demon of the tale itself. Since De Camp and Lin Carter worked together, it is unclear who to blame for this silly name, but since neither seemed to voice any objections to the title, I’d say they share the blame. In the tradition of such priceless treasures as the Voynich Manuscript and the Rosetta Stone, the setting of the story – Shumballah, the capital of Kush – “The Shumballah Fragment” is the most fitting one in my mind. In addition to this draft, Howard wrote a synopsis: it is therefore natural that this synopsis be called “The Shumballah Synopsis.”

“The Tombalku Fragments”
Untitled Draft “Three men squatted beside the…”
Untitled Synopsis “Amalric, a son of a nobleman…”
In stark contrast to the laughable “Snout in the Dark”, “Drums of Tombalku” was an evocative and powerful (dare I say, almost Howardian?) title courtesy of de Camp, and the title I have the least problem accepting. However, in the interests of comprehensiveness, I think it fair to apply the same rule to this fragment. As with the previous story, the city-empire of Tombalku is mentioned frequently, and since it is already known by the alternative title, “The Tombalku Fragment” is the best of both worlds. The accompanying synopsis will share this convention to become “The Tombalku Synopsis.”

“The Yaralet Fragment”
Untitled Fragment “The battlefield stretched silent…”
Undoubtedly the most egregious of the four Conan titles is “The Hand of Nergal.” While not offensive in and of itself, the major problem is that both Nergal and his hand are Carter additions to the story. Thus it is entirely inappropriate to name the fragment after elements that never existed when it was originally written! Despite the brevity of the fragment, a mere two pages, there are a few distinctive characteristics: the most prominent is that of the city of Yaralet, the setting of the story. “The Yaralet Fragment” is thus the title I deem best for this short piece. 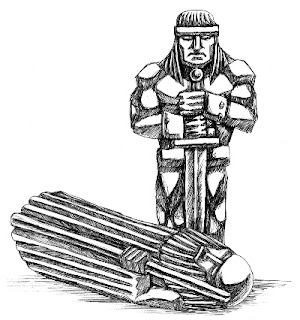 “The Ronaro Fragment”
Untitled fragment “Three men sat at a…”
“Wizard and Warrior” is presumably taken from the fictitious game Kull, Brule and special guest star Prince Ronaro atl Volante are playing, and another fitting title from Carter. The enigmatic Ronaro is clearly the most prominent unique aspect of the story, and were it continued he would undoubtedly have played an important role, thus making his name the element chosen for the title.

“The River Stagus Fragment”
Untitled Draft “‘Thus,’ said Tu, chief councillor…”
Moving on to the Kull stories, this tale is known as “Riders Beyond the Sunrise”: an appropriate enough title from Lin Carter, likely taken from this exchange:


“We ride into the sunrise,” remarked Kelkor.
“Aye,” was Brule’s grim response. “And some of us ride beyond the sunrise.”

It recently came to my attention that Steve Tompkins once referred to this piece as “The River Stagus Fragment.” As an acknowledgment of his vast contribution to Howard studies and a small tribute to the inspiration he gave me, I believe it fitting to use this as the title for the fragment. My thanks to Deuce Richardson for reminding me of this. 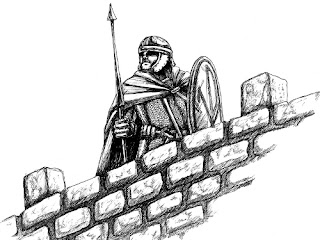 “The Constantius Synopsis”
Untitled Synopsis “The story of a forgotten age; of…”
Unlike the Kull and Conan tales, the two Bran Mak Morn documents did not suffer the indignity of posthumous collaboration, and were spared from poor titles as a result. The synopsis was a difficult one to name due to the brevity, and also the sheer number of identifiable names. I have settled on “The Constantius Fragment”: Constantius is the romantic lead of the tale, and listed first of three “dominant elements” in the synopsis.

“The Taduka Fragment”
Untitled fragment “Men have had visions ere now…”
One of the most tantalizing fragments Howard left unfinished is this early piece, featuring more past lives than the James Allison tales combined! Glenn Lord uses the title “The Wheel Turns”, an evocative and interesting name taken from the first chapter. There are two notable elements in the story: the character of Stephen Hegen, and Taduka, the name of the mysterious plant that provokes the mental voyage of the former. Since the Taduka element is so intriguing and central to the concept of the story, I decided upon “The Taduka Fragment” for this fascinating piece.

There are many more untitled synopses, fragments, and drafts, including some which have not yet been published: I will endeavour to go through those which are available, and add them to the system I am using, though anyone else who wishes to adopt my system is certainly free to come up with their own.