Robert E. Howard's Conan - Adventures in an Age Undreamed Of

I feel a bit like an apostate. I've not been keeping up with REH news and events for a while, though I still pop in at the Robert E. Howard Readers Facebook page and very occassionally at the REH Forums. Things seemed a bit quiet.

Then Jeff Shanks had to go and ruin it all with this announcement.

KNOW, oh prince, that between the years when the oceans drank Atlantis and the gleaming cities, and the years of the rise of the Sons of Aryas, there was an Age undreamed of....

Modiphius is proud to announce a licensing deal with Conan Properties to publish Robert E. Howard’s CONAN Adventures In An Age Undreamed Of. This is CONAN roleplaying as Robert E. Howard wrote it – savage pulp adventure battling ancient horrors in the Hyborian Age! We plan to bring the game right back to its roots, focusing on the original stories by Robert E. Howard.

Players and GM’s alike will feel the might of the 2d20 game system, the cinematic roleplaying rules devised by Jay Little (Star Wars: Edge of the Empire) for Mutant Chronicles, and sharpened up for intense sword and sorcery action. The 2d20 system lets players experience the true pulp adventure of the CONAN stories.

Modiphius is working with other Conan Properties licensing partners including Monolith Board Games, creator of the hit CONAN boardgame which has surpassed $2 million on Kickstarter, and Funcom, creator of the long-running, free-to-play, MMO Age of Conan. Modiphius plans some select supplements including missions designed for the Monolith boardgame, as well as floorplan tile sets allowing you to use Conan miniatures in your roleplaying adventures!

Modiphius is already working on the roleplaying corebook for Robert E. Howard’s CONAN Adventures In An Age Undreamed Of to be released this Fall. A Kickstarter is planned for the summer to fund a larger range of roleplaying supplements, campaigns, and accessories to follow the core book.

Ho, Dog Brothers! (and Sisters) Don your mail, hone your blade, and pray to whatever fickle gods might listen. Harken to the sound of clanging steel, cries of battle, and death curses spat from bloody, frothing lips! Tread the jeweled thrones of the earth at www.modiphius.com/conan or die in towers of spider-haunted mystery. Crom cares not!


So having talked with Jeff about this just after the announcement, it seems that this is going to be something I've been wanting since I got back into Robert E. Howard - a Conan adaptation that just sticks to Howard, with no pastiches whatsoever. No Arenjun, no Serpent Crown, no Spider-Thing of Poitain, no Colossus of Shem, none of that. No ties with the comics, films, or books by other authors. And this isn't just us Howard crumbs - some real stars in that team there from the world of RPGs. Not to put too fine a point on it, this is extremely cool.

This follows up on the tremendous Monolith Conan RPG, which still has some time left on the clock (just over two days as of this posting) to go nuts with stretch goals. I've backed it: it's the first time I can recall when you could have miniatures based on characters other than Conan, Belit or Thoth-Amon - Valeria, Shevatas, Taurus, and my girl Zelata! 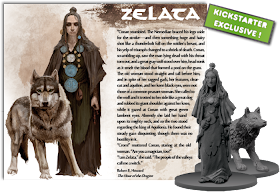 Sure, the Aquiromians and Uberboreans are still lingering, but with this new RPG announcement, I feel like we're getting there. The Mongoose Conan RPG was excellent, but I'm of the opinion Conan and the Hyborian Age is easily rich enough to support multiple interpretations, and this extends to RPGs. Perhaps, then, this could be the start of an entirely new generation for Howard and Conan? The Conan license seemed stuck in a sort of limbo: the 2011 film, Mongoose losing the license, Brian Wood and then Fred Van Lente all but rebooting the Dark Horse Conan, Age of Conan going free to play. It seemed Conan was in danger of slumber. Perhaps now, after Conan Meets the Academy broke down the gates of Academia and Howard's status as A Writer Of Real Literary Merit has become normalised, we're going to see a change.